Crocker and Muyres steal another win at World Mixed Doubles

Laura Crocker and Kirk Muyres cruised to a 9-3 win over Guyana – their fourth straight win – to stay undefeated at the 2018 World Mixed Doubles Curling Championship in Östersund, Sweden, on Monday morning. 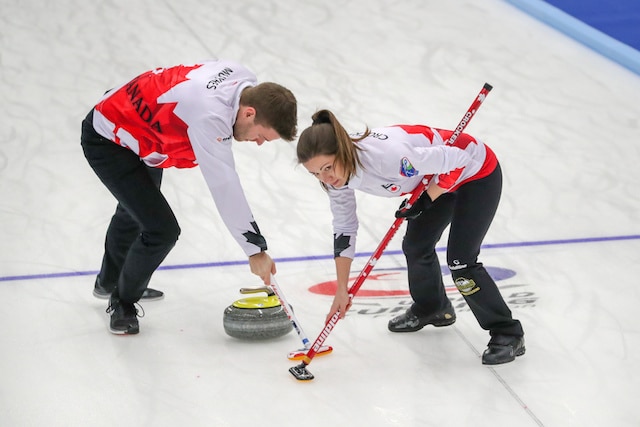 The Canadian duo stole the first four ends from Guyana’s Farzana Hussain and Rayad Husain to lead 6-1 at the break. In the fifth, with the four-foot full of rocks and Canada lying two, Husain executed a tricky raise tap to score three. That was the only offence the Guyanans could generate and they conceded in the seventh end. With three games remaining in the round robin, Crocker and Muyres are alone in first place in Group E with a 4-0 record, but they have yet to face the teams just behind them in the standings: Czech Republic and Korea – both still undefeated as well – and Germany. On Tuesday, Canada will meet Czech Republic’s Zuzana Hajkova and Tomas Palk (3-0) at 11:45 a.m. ET. Follow the scoring on the World Curling Federation website, https://www.worldcurling.org/wmdcc2018/livescores Selected games at the 2018 World Mixed Doubles Championship will be live-streamed on the World Curling Federation’s YouTube channel.