In the battle of undefeated first-place teams, it was Canada’s Sherry Anderson who came out on top of a close battle with USA’s Margie Smith on Monday morning at the 2018 World Senior Curling Championships in Östersund, Sweden. 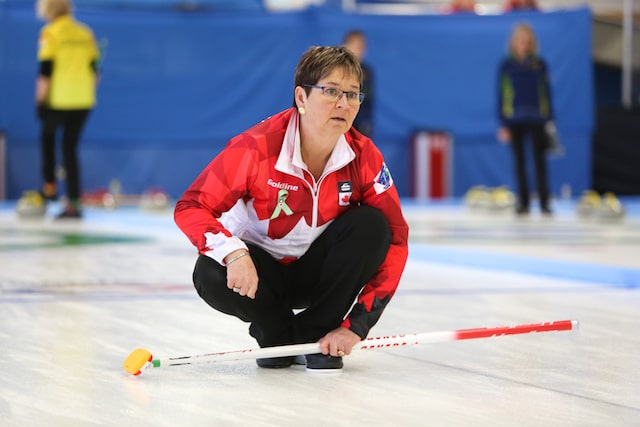 Anderson stole two points in the final end to defeat Smith 8-4 in a game that saw the USA patiently reel the Canadians in during the later stages. With the win, Anderson and her Saskatoon team of vice-skip Patty Hersikorn, second Brenda Goertzen, lead Anita Silvernagle and coach Bill Tschirhart, take over sole possession of first place in the Group A standings. “It started out pretty good, and then we had a sloppy end or two,” admitted Anderson after the game. “Then I had a hit-and-stick to be three up in seven, which is big so that was disappointing. So it kind of ended with a bad taste in your mouth. But we got a W so we will move on from there.” Canada had control of the game early, with a 5-2 lead after three ends. But Smith blanked the next two ends until she could score her deuce in six. Anderson was held to a single in seven after her shooter rolled out on a takeout, giving hammer back to the Americans who trailed 6-4 heading into the final end. But a steal of two put the game away and means Canada remains alone at the top of the standings and undefeated. Anderson said that managing the clock became an issue in such a tight game. “One positive is that we used our timeout in the sixth end when we normally wouldn’t use it,” she said. “Then our time was a little bit down, 3.5 minutes in the last end with no timeouts. You kind of forget that you don’t have two timeouts like we do in Canada so that’s kind of different. But we managed our time clock well and we actually had 44 seconds at the end of the game left.” “We are fortunate we have a pretty good contingent here,” said the Canadian skip about the fan support from the stands. “There are about 30 of them from Canada from the men’s and women’s team so that’s nice. They’re pretty vocal, so that’s good! But it’s pretty different. You’re used to seeing in our provincials several hundreds of people watch it. But it’s a pleasure and an honour to play for Canada.” In the men’s round robin on Monday, Edmonton’s Wade White, backed by vice-skip Barry Chwedoruk, second Dan Holowaychuk, lead George White and coach Bill Tschirhart, regrouped after Sunday’s loss on a last-rock measurement to steal three consecutive ends on the way to a 9-1 win over Germany’s Jonny Jahr. 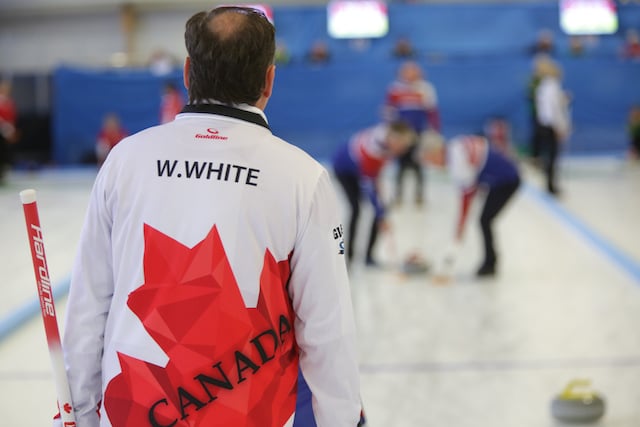 “That was a good bounce-back, after waiting all night to curl again and think about all the shots from yesterday,” said White, who admitted that the loss had stung. “All it was yesterday was that I missed my last one last night, and you think about the whole game, a quarter-inch here or there. But this was a good bounce-back.” “That was our usual team there,” he said about his foursome’s strong performance today. “Usually the team curls good and if I can come out and make my shots when I have to, make my draws, that’s usually when we come out and curl pretty good. I was pretty disappointed yesterday, but you’ve got to get over it.” On Tuesday, the women will face Japan’s Miyuki Kawamura at 2 a.m. ET, and the men will play Belgium’s Walter Verbueken at 6 a.m. ET. You can find information on schedules and team line-ups at www.worldcurling.org/wscc2018