Canada’s Laura Crocker and Kirk Muyres won their sixth straight game of the round robin to secure their spot on the playoffs at the 2018 World Mixed Doubles Curling Championship on Wednesday morning in Östersund, Sweden. 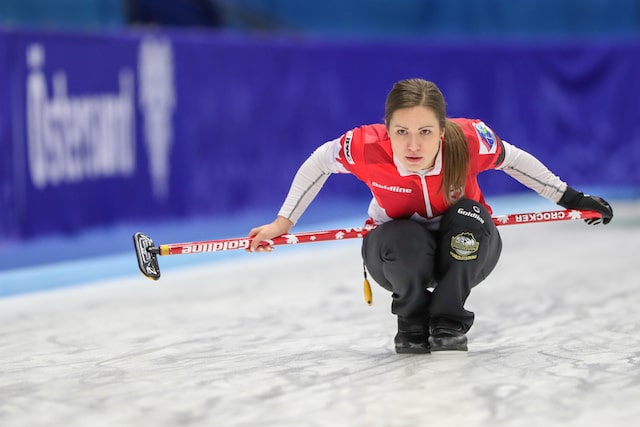 Against Germany’s Julia Meissner and Andy Buettner (2-3), the Canadian duo stole a single in the fourth to go ahead 4-1. A big score of five in the sixth end put the game out of reach. Despite the run of wins, Crocker feels the team still needs to pay attention to details as the competition ramps up – Canada’s final round robin game will be against South Korea, also undefeated and also headed for playoffs. “I think we’re just putting a lot of pressure on the other teams and any time you can do that you have to be pretty happy,” she said. “We’re making them make tough shots, it’s not like we’re getting easy misses out of the other teams right now.” Crocker isn’t taking any team for granted and knows that every game is a chance to build towards the playoffs. “We’re playing really well and we actually had a couple of close games early against teams who played really well,” she said. “But, looking at it from the outside, people may think they should have been easier games. So that was a big mental grind for us to get through those couple of games. We had that experience early so now we are just getting better with every game and every end.” “We just want to keep getting a little bit more precise knowing we are going to be playing some really good teams moving forward,” she added. “We want to really nail down our weights and the ice figured out in the next few (games).” 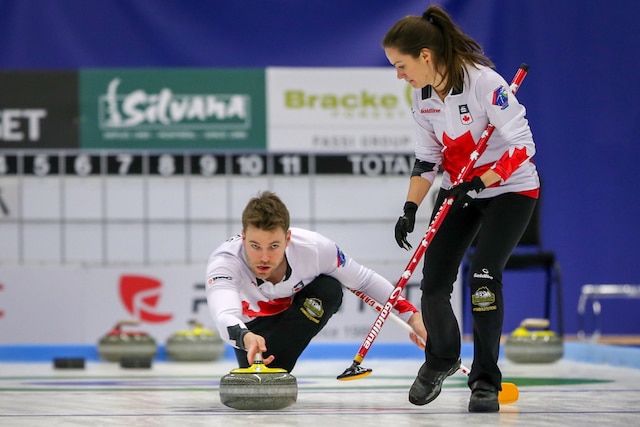 Kirk Muyres delivers his rock as Laura Crocker prepares to sweep during the round robin of the 2018 World Mixed Doubles Curling Champship in Östersund, Sweden (WCF/Richard Gray photo)

On Thursday, Crocker and Muyres will play their final round robin game against the only other undefeated team, South Korea, with the winner taking over first place in Group E standings. The game gets underway at 6:30 a.m. ET. Follow the scoring on the World Curling Federation website, https://www.worldcurling.org/wmdcc2018/livescores Selected games at the 2018 World Mixed Doubles Championship will be live-streamed on the World Curling Federation’s YouTube channel.