White and Anderson finish round robin in winning style

Team Canada’s men and women wrapped up the round robin with wins on Thursday morning as both teams head into playoffs at the 2018 World Senior Curling Championships in Östersund, Sweden. 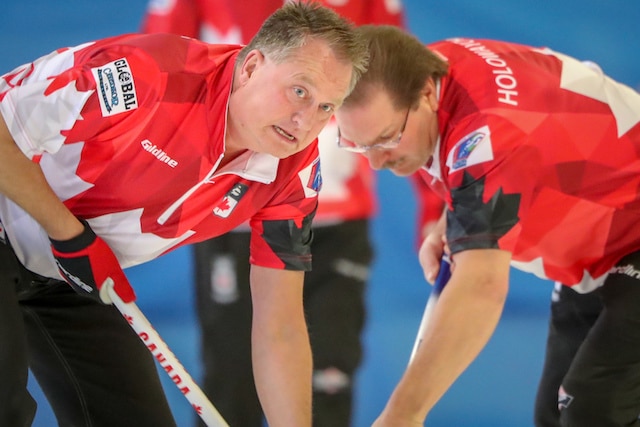 Edmonton’s Wade White, backed by vice-skip Barry Chwedoruk, second Dan Holowaychuk, lead George White and coach Bill Tschirhart got off to a slow start against Turkey’s Murat Akin (1-4), giving up a steal in three and taking a small 4-2 lead into the break. But they poured on the offence in the second half, stealing seven points in the next two ends on the way to an 11-2 win. “It’s a little bit hard (when you’re already qualified), it’s hard to get going,” admitted White. “We didn’t seem to be sharp off the start, but when they gave us a scare I think we woke up and got some points. We’re not used to that, we’re used to guys being right in it.” Anderson and her Saskatoon team of vice-skip Patty Hersikorn, second Brenda Goertzen, lead Anita Silvernagle and coach Bill Tschirhart came out strong against Australia’s Sandy Gagnon (2-4). Anderson took her deuce in the first, then went on to steal the next two ends before allowing Gagnon to get on the scoreboard. Canada stole two more ends for an 8-1 win. “You only get one game a day here and you don’t want to come out flat,” said the Team Canada skip after the game. “I thought we rebounded nicely. We didn’t start our game yesterday real great. We had some fairly wide-open misses and I didn’t have great draw weight, so you want to come back and play well and get back on track.” “I think we played pretty good,” she added. “There (aren’t) too many shots that I’d have back, so that’s always a good sign.” Playoffs begin on Friday and match-ups will depend on the final standings in all pools once the round robin concludes. Visit the event website for details of team match-ups and game times: https://www.worldcurling.org/wscc2018 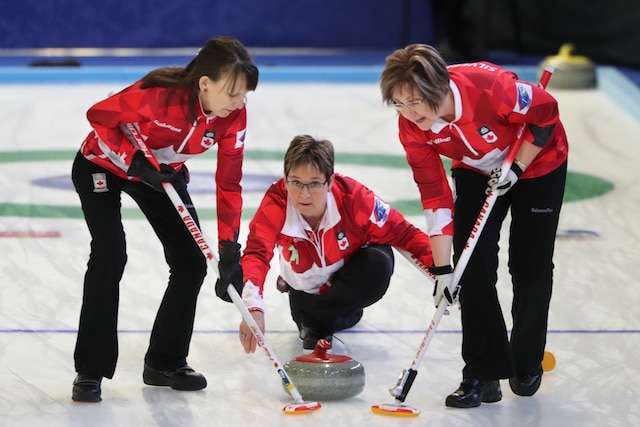