Three builders to be inducted into Canadian Curling Hall of Fame

Three individuals whose work behind the scenes contributed greatly to the growth of curling in Canada will be inducted into the Canadian Curling Hall of Fame this fall. 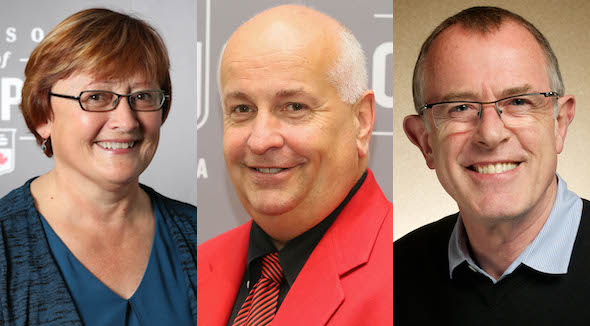 From left, Patricia Ray, Peter Inch and David Beesley will be inducted into the Canadian Curling Hall of Fame later this month.

Peter Inch, Patricia Ray and the late David Beesley will join the Hall during a celebration banquet at Curling Canada’s National Curling Congress later this month in Ottawa.

“These three names might not be familiar to curling fans, but to those people who work inside the boards at curling championships across Canada, Peter, Patricia and David played hugely significant roles in making our sport what it is today,” said Scott Comfort, Chair of Curling Canada’s Awards and Hall of Fame Committee. “It’s truly gratifying to be able to honour Peter, Patricia and David and recognize their effort over the years, and to ensure their contributions are not forgotten.”

Here’s a look at the three inductees:

He was instrumental in negotiating sponsorship and television deals that gave Canadian curlers far bigger, and more widely exposed, stages on which to perform. His vision led us to the Season of Champions series of events, and even in his final days, he continued working hard to continue raising curling’s profile in this country.

“David was never one for the spotlight, but we know what a great deal of pride he took in seeing the fruits of his labours over the years,” said Beesley’s wife, Mary Opper. “We are immensely grateful and humbled to see him honoured in this way.”

Peter served as the Chair of Curling Canada’s Board of Governors for the 2016-17 season, a role he prepared for over the years through countless volunteer hours put into the sport of curling.

A native of London, Ont., Inch was first elected to the Board of Governors during the 2013 National Curling Congress in Ottawa. Prior to that, he worked tirelessly on behalf of the sport in helping organize numerous championship events in his hometown, including the 2006 Scott Tournament of Hearts and the 2011 Tim Hortons Brier. He also chaired the host committee for the 2002 Canadian Senior Men’s and Women’s Championships in nearby St. Thomas.

“My goal has always been to make a difference in the curling community,” said Inch. “I feel extremely humbled and honoured to receive this recognition, and join and the many exceptional men and women of the past and present in the Curling Canada Hall of Fame.”

Patricia Ray spent 29 years at Curling Canada as the organization’s Chief Operating Officer, but that title didn’t do justice to her contributions to the sport.

In times of need, Ray stepped up repeatedly for Curling Canada — she served as the organization’s interim Chief Executive Officer on three occasions (the most recent stint coming during the 2015-16 season) in addition to the not-insignificant demands of her COO duties. Through it all, she was calm, poised, a voice of reason and, always, a friendly face in times of stress.

“I am deeply humbled and thankful for this unexpected distinction,” said Ray. “Over the course of my career with Curling Canada, I had the great fortune to work with a group of passionate and devoted colleagues – at the national office as well as around the board table. Sharing the excitement of every curling season for 29 years has been a great privilege as well as a truly enjoyable experience. To top off my career in this way is simply, indescribably wonderful.”

Earlier this year, two competitors — Christine Jurgenson and Cathy Overton-Clapham — were inducted into the Canadian Curling Hall of Fame.