KELOWNA, B.C. — It had been a long wait to put on the Maple Leaf, but it was worth it for Mike Anderson’s Canadian mixed curling team. 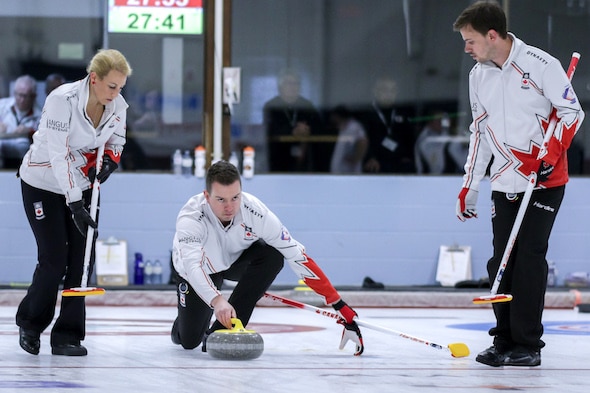 Almost a year after earning the right to represent Canada at the 2018 Winn Rentals World Mixed Curling Championship, Anderson’s team from the Thornhill, Ont., Curling Club made short work of Austria’s Günter Dressler Saturday afternoon at the Kelowna Curling Club, rolling to a 10-2 victory in six ends in its world championship debut. 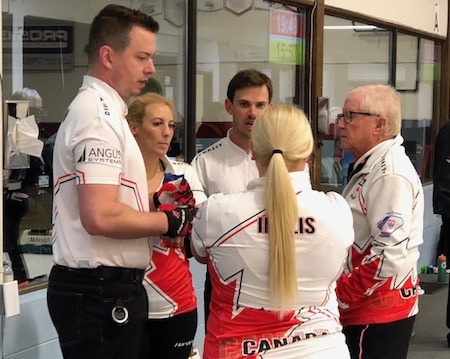 Canadian coach Jim Waite, right, talks to the team during the fourth-end break against Austria.

“Between winning last year, and being out here for a few days before our first game, we just really wanted to get out on the ice,” said Anderson. “It was good; the ice was a little different (from practice), and we weren’t as sharp as we hope to be by the end of the week, but it was a great learning experience. We went out to make sure we were on the right side of the win-loss column to start, and we achieved that goal.”

Canada opened with a pair in the first end, held the Austrians to a single in the second, and then took control with four in the third end and a stolen deuce in the fourth when Dressler was heavy with his draw.

Austrian managed another single in the fifth, but Anderson’s delicate tap to score a pair in the sixth end prompted Austria to concede the victory.

The Canadian team is entering every game blind with no scouting reports on the teams it will face, but that won’t change the team’s approach, suggested Anderson.

“We’re treating every team like they’re going to go out and make all eight shots (in an end),” he said. “At the end of the day, it doesn’t matter what colour their shirts are; they’re throwing eight rocks against us, and if they make all eight, we’re going to have to make all eight back.”

Anderson had high praise for the surface put down by Chief Ice Technician Mike Merklinger.

“The ice was almost bang on,” he said. “To have it this way, this early in the season for this type of event, it’s going to be an awesome surface to play on.”