Nova Scotia faced a crucial test at the Travelers Curling Club Championship in the women’s division and the team from Lower Sackville lived up to the challenge. 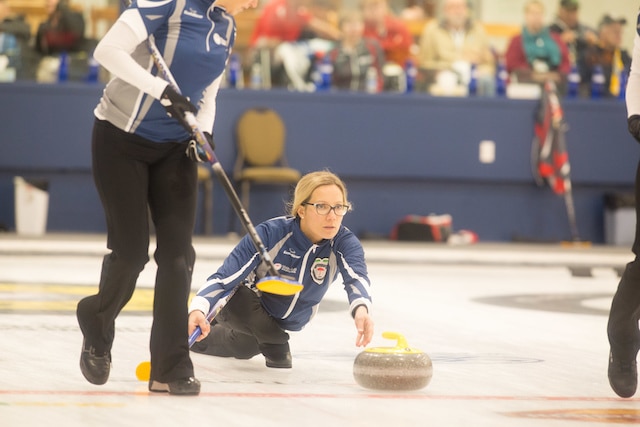 Michelle Williams’ Lakeshore Curling Club rink earned a convincing win against previously unbeaten Manitoba to take possession of first place in Pool B at the Miramichi Curling Club. Fresh off a win over Ontario, Williams and her team opened the scoring in the first end by putting a three on the board. Manitoba responded with a single in the second end. Nova Scotia took full control of the game in the third end by picking up five points and never looked back. Nova Scotia went on to win 12-2. Williams, third Mary Porter and second Abby Miller are making their second Travelers appearance in three years. This is the first time Kathleen Porter has worn the Nova Scotia colours at a national championship. “You just brought that to my attention,” Williams said after being informed she’d moved to the top of the standings with the win. “We’ve been picking it up every game. The communication is there so that’s great and we’re playing better as we go on.” Williams, Mary Porter and Miller have been curling together for five years. Kathleen was added to the team the season after their quarterfinal exit at the 2016 Travelers Championship in Kelowna, B.C. “In Kelowna I really struggled and I really wanted to come back and show the team… I felt that was on me in the last one. We did well but I wasn’t playing my best game,” Williams said before her team’s last round robin game at the Miramichi Curling Club. The Lakeshore Curling Club team will play Prince Edward Island (1-4) on Thursday at 7:30 p.m. (all times Atlantic). A win for the Nova Scotia rink would earn them top spot in their pool and a bye directly to the semifinal on Friday at 6:30 p.m. Prince Edward Island has, however, accepted the role of playing spoiler after they knocked off Ontario (3-2) to get their first win on Thursday. “Over the moon! We’re over the moon,” PEI third Nancy MacFadyen beamed after her rink stole five consecutive points to beat Ontario 8-7 in an extra end. “The other young teams have kind of adopted us. I think we’re the oldest team here and the other young ones have all taken us under their wing,” MacFadyen added. 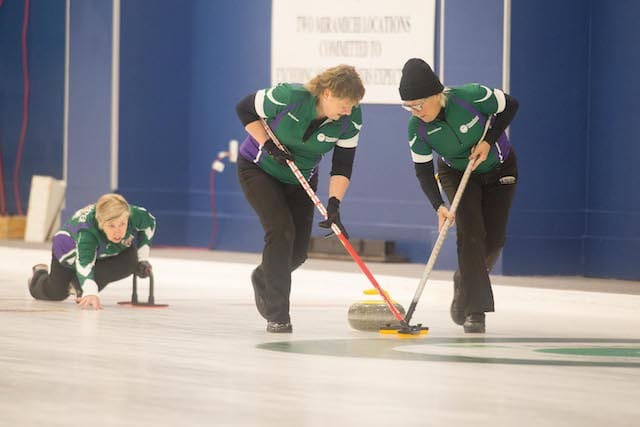 Second- and third-place teams from each pool will advance to crossover playoffs at the conclusion of the round robin. Ontario and Newfoundland and Labrador share that third spot in Pool B ahead of the final draw. Newfoundland and Labrador can do no worse than a tiebreaker if they were to win their final round robin game on Thursday night against New Brunswick. If teams remain tied for the third spot, then a tiebreaker will be played on Friday morning. In Pool A action Quebec was seeking their first win against previously unbeaten Northwest Territories on Thursday afternoon. The team from Glenmore, Q.C., upset the Yellowknife foursome with a 7-5 win and complicated the standings in Pool A. Northwest Territories still holds on to first place with an identical record as Alberta at 4-1. The team from the north gets the edge in the standings by virtue of their head-to-head win earlier in the week. Alberta held off a challenge from Nunavut in Draw 12. Morgan Muise’s rink from Calgary earned an 11-4 win. Elsewhere in Draw 12 Northern Ontario’s playoffs hopes were dealt a blow by Saskatchewan. Moose Jaw’s Elaine Osmachenko improved to 3-2 thanks to a 4-3 win over Kathie Jackson of Fort Frances. Northern Ontario will face Northwest Territories in a critical showdown with playoff implications on Thursday night. In men’s action Manitoba, British Columbia and Saskatchewan lead the way with perfect records. The playoff situation will be sorted out after the final round robin draw on Thursday evening. Winners from quarterfinal play on Thursday will move into the semis. The semifinal winners will play for gold, and the losers will play for bronze, Saturday, Nov. 24, at 9 a.m. The 14 men’s and 14 women’s teams are split into two seven-team round-robin pools. After a single round-robin, the top three teams in each pool will make the playoffs. The first-place teams will be seeded directly into the semifinals, Friday, Nov. 23, at 6:30 p.m. (all times Atlantic). The second- and third-place teams will meet in crossover quarter-finals Friday at 1:30 p.m., with the winners moving into the semis. The semifinal winners will play for gold, and the losers will play for bronze, Saturday, Nov. 24, at 9 a.m. Selected games from the 2018 Travelers Curling Club Championship will be live-streamed at www.curling.ca/2018travelers. Scores and standings from the event will be available at www.curling.ca/scoreboard. For draw times, team lineups and other event info, go to: www.curling.ca/2018travelers/