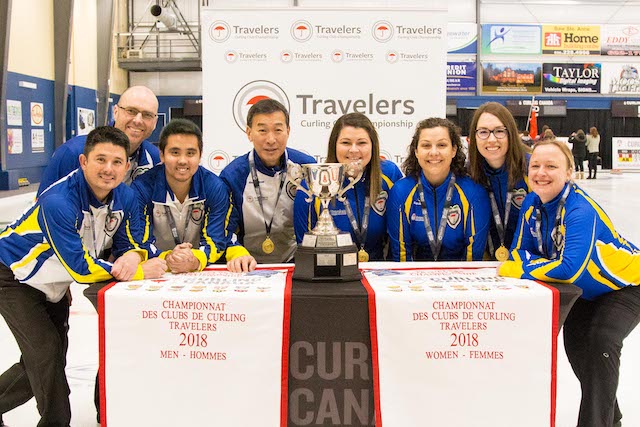 The team from the Calgary Curling Club of Muise, third Lyndsay Allen, second Sarah Evans and lead Sara Gartner have curled together for seven years and left Miramichi on Saturday with their province’s second women’s title in eight years. “This is what we came for. We lost the final in Kelowna two years ago so it feels pretty good to put in a lot of hard work over the last two years to get back and take advantage of another opportunity in the final,” Muise said after running Nova Scotia out of rocks in the eighth end. “We started the game with a few more rocks in play than we’d normally play in the first end. There was a biter on the edge that the other team ignored thinking it was out and the measure was in our favour in the end,” Muise explained. The Calgary team stole in the second end to take a four point lead and never looked back the rest of the game, en route to their 7-3 win. Muise and her Alberta squad defeated Nova Scotia skip Michelle Williams, third Mary Porter, second Abby Miller and lead Kathleen Porter, who earned the silver medal. Muise, 33, is the Curling Coordinator at the Spray Lake Sawmill Family Sports Centre and says her team is looking forward to their return to Alberta, “We have the bye in our league game on Tuesday night!” Muise said with a fist pump and cheers from her teammates. In the men’s final, British Columbia became just the second men’s team to run the table, going 6-0 in the round robin and winning both playoff games in convincing fashion. The team from the Richmond Curling Club was meticulous in their victory over Nova Scotia’s Kurt Roach. “We’re so, so happy… to bring back the banner to the home club it means everything,” Cody Tanaka, who throws fourth stones for the B.C. team, said after the 8-3 victory. Tanaka, skip Vic Shimizu, second Trevor Bakken and lead Mark Yodogawa were in danger of giving up three points in the second end but Roach’s final stone over curled, resulting in a steal and a 3-0 lead early in the game for B.C. The 24-year-old ice technician widened the lead with a challenging draw to the four-foot in the fourth end. “The ice was great and probably the easiest to read all week. I felt really comfortable with my draw weight and hits,” Tanaka said. The young skip was named Most Valuable Player in the men’s tournament and his shot making in the final lived up to the award, including a flat double takeout in the third end to force Nova Scotia to a single point. Roach with third Mark MacNamara, second Travis Stone and lead Robin Nathanson put pressure on the B.C. team in the sixth end. Facing two counters in the four-foot, Tanaka was able to find the button and gain full control in the Travelers Championship gold medal match. Cornwall, Ont., skip Matthew Dupuis, third Terry Lichty, second Jonathan King and lead Charles Wert won the bronze medal after the team from the Cornwall Curling Centre executed a perfect six-foot tap to the button to defeat Saskatchewan 5-4. For the second year in a row Ontario also claimed third spot in the women’s division. Oshawa Curling Club’s Stacey Hogan, third Suzanne Miller, second Mandy Aston, lead Amber-Dawn Duncan and coach Nathan Martin defeated Northwest Territories 5-4. The skip from Yellowknife will not leave Miramichi empty handed. Sarah Stroeder was chosen as Most Valuable Player in the women’s division by Curling Canada’s onsite umpires. Sportsmanship awards were handed out on Saturday to players at each position for men and women. Chantelle Masson (Nunavut skip), Nancy MacFadyen (P.E.I. third), Tamar Vandenberghe (Yukon second) and Anneli Jokela (Northwest Territories lead) were chosen by their peers as sportsmanship winners in the women’s division. Jim Sias (Yukon skip), Mark MacNamara (Nova Scotia third), Devon Bouillon (Northwest Territories second) and Cameron Barth (Manitoba lead) were winners in the men’s event. Teams competing on the ice in Miramichi helped give back to youth curling across Canada through the annual Travelers Championship silent auction and the team fundraising campaigns. This year’s efforts raised just over $29,000 to support the Curling Canada Foundation. There was extra incentive for each team to raise money as every $400 raised earned that team a ballot for a grand prize raffle which included an all-expenses trip for four, including event passes, accommodation and flights, to the 2019 World Financial Group Continental Cup Jan. 17-20 in Las Vegas. The Nunavut women’s team (Chantelle Masson, Alison Griffin, Carmen Kootoo and Alison Taylor) won the grand prize and are on the way to Las Vegas in January.   “I’m speechless. We’re shaking and so excited!” said Griffin on behalf of the team.