Canada’s best collection of curling talent will be under one roof when the 2018 Home Hardware Canada Cup gets underway Wednesday at Affinity Place in Estevan, Sask. 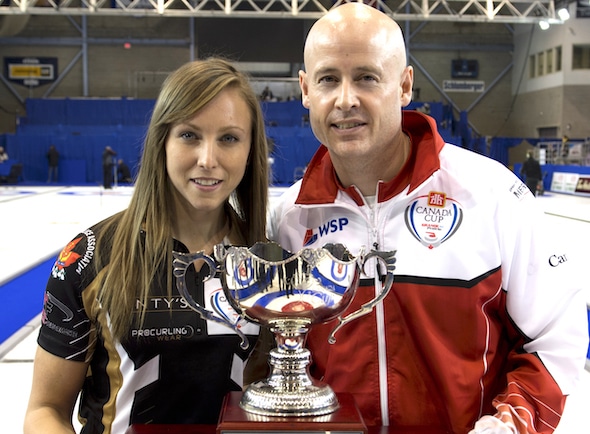 Eight women’s and seven men’s teams will take to the ice in Estevan, chasing not only their shares of the $140,000 purse, but numerous other perks for the women’s and men’s champions, including guaranteed berths into the 2021 Road to the Roar Pre-Trials, which will be the final qualifying event for the 2021 Tim Hortons Roar of the Rings Canadian Curling Trials — the event that will decide Canada’s four-player teams for the 2022 Winter Olympics in Beijing.

Additionally, the 2018 Home Hardware Canada Cup champions will qualify for a Curling World Cup event during the 2019-20 season.

It will be the 14th edition of the Home Hardware Canada Cup, and the event will feature a who’s-who of Canadian curling. The top-finishing teams on the Order of Merit from 2017-18 earned berths, as did the top previously non-qualified men’s and women’s team on the 2018-19 Canadian Team Ranking System as of Nov. 11.

The Home Hardware Canada Cup was last contested two years ago in Brandon, Man., (the event isn’t played during Olympic seasons), and both defending champions are back in the field, albeit with slightly different lineups.

On the women’s side, Jennifer Jones’s Winnipeg team enters as the reigning Scotties Tournament of Hearts and World Women’s champion, but will have Jocelyn Peterman stepping in at second this season in place of Jill Officer, who has taken a step back from competitive curling.

On the men’s side, Reid Carruthers of Winnipeg also has one new player in the lineup, with long-time rival (and good friend) Mike McEwen on board and throwing last rock; he took the place of Braeden Moskowy, and will be calling the shots in Estevan.

But Moskowy will be in the field in Estevan, throwing third for two-time Canadian junior champ Matt Dunstone and his Regina crew. Team Dunstone was the last men’s squad to qualify as the leading non-qualified team on the CTRS.

Teams Koe and Epping are currently sitting one-two in the 2018-19 CTRS men’s standings.

On the women’s side, there will be one additional team as there was a virtual tie in the 2017-18 Order of Merit standings for the final berth.

While Team Jones is the defending champion, it will be teams skipped by Ottawa’s Rachel Homan and Kerri Einarson of Gimli, Man., who will arrive in Estevan with the hottest hands; they currently are first and second in the women’s CTRS standings.

The 2018 Home Hardware Canada Cup media guide, including rosters and player biographies, is available for download by CLICKING HERE.

TSN and RDS2 will provide complete coverage of the Home Hardware Canada Cup, from the opening draw on Wednesday at 9 a.m. (all times Central) through to and including the women’s (2 p.m.) and men’s (7 p.m.) finals on Sunday. CLICK HERE for the broadcast schedule.

The Home Hardware Canada Cup format calls for the men’s and women’s teams to play a three-day round robin, with the first-place teams advancing to their respective finals on Sunday, while the second- and third-place teams meet in semifinals on Saturday, after any required tiebreakers, to determine the other finalists. CLICK HERE for the full draw.

The total prize money is $70,000 each for men and women, with the winning teams receiving $14,000. The runners-up get $9,000 while the third-place finishers earn $5,000. Men’s teams also receive $2,000 for each round-robin win, while the women’s teams receive $1,500, but will play an extra round-robin game due to the increase in the field, thus giving them an added opportunity to earn a win bonus.