ESTEVAN, Sask. — On the surface, it was another round-robin game at the 2018 Home Hardware Canada Cup between two of the top men’s teams in Canada. 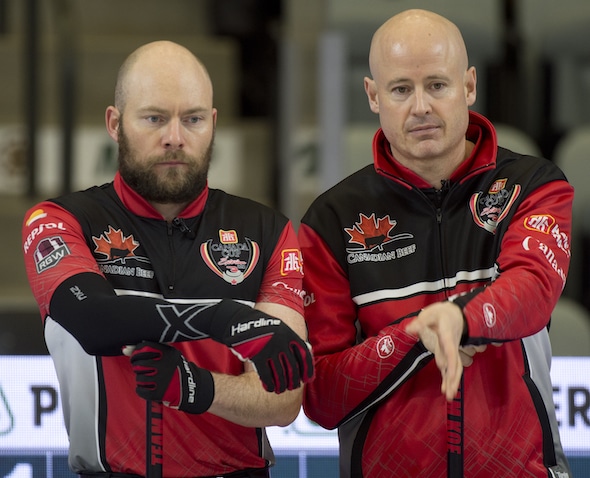 But if you wanted, you could peel back a layer or two and look at Friday morning’s clash between Edmonton’s Brendan Bottcher and Calgary’s Kevin Koe as the opportunity for one of the teams to send a message to the other two months ahead of what seems to be an inevitable rematch at the 2019 Boston Pizza Cup Alberta men’s championship — the event that will decide Alberta’s entry into the 2019 Tim Hortons Brier in Brandon, Man.

From that perspective, Koe’s emphatic 10-3 triumph, locking up at least a tiebreaker berth at Affinity Place in Estevan, would appear to have done the job.

But Koe, backed up by vice-skip B.J, Neufeld, second Colton Flasch and lead Ben Hebert, was having none of that line of reasoning.

“Well, they’ve sent a message to us (this season),” said Koe with a chuckle. “They beat us up a couple times pretty easy already. There’s a good chance we’ll play them in provincials, but I don’t put too much into who beats who before Christmas.”

It was, in fact, Koe’s first win over Bottcher this season after previous losses in Portage la Prairie, Man., in the final of the Canad Inns Men’s Classic (7-5) and at the Grand Slam Tour Challenge in Thunder Bay, Ont. (8-1).

“That felt good; we’ve struggled against this guys this season, they’ve beaten us a couple times, and they’re getting better,” said Koe, who improved to 4-1. “You can tell they’re going to be one of the top teams in the world. We got some uncharacteristic misses out of them, and we played well, so it’s a big win for us.”

Bottcher (3-2) was hit by his second time-clock violation of the Home Hardware Canada Cup, running out of time in the fifth end, leading to Koe scoring four, matching the four he scored in the third end.

The new-look Koe squad — Neufeld and Flasch came on board in the off-season — has posted a 30-11 record in its first season together, giving Koe some justifiable optimism about what’s ahead.

In the other men’s game Friday, Regina’s Matt Dunstone prevailed 7-3 over Winnipeg’s Reid Carruthers; both teams entered the game winless in four starts.

In women’s action, Winnipeg’s Jennifer Jones and Kerri Einarson of Gimli, Man., kept pace with each other with victories on Friday morning; they’re tied for the lead with 4-1 records.

Einarson cracked a three in the ninth end for an 8-5 victory over Casey Scheidegger (3-2; Lethbridge, Alta.), while Jones stole two in the sixth end en route to a 7-4 victory over Winnipeg’s Alli Flaxey (1-4).