While most of the competitive curlers are ready to settle in next to a fire with a cup of eggnog for the Christmas break, a few Canadian teams are still on the far side of the world, chasing victories, money and points on the World Curling Tour. 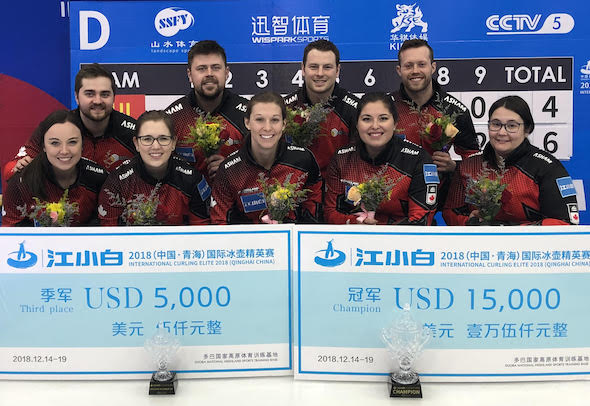 Winnipeg’s Reid Carruthers and Edmonton’s Laura Crocker are in Japan this week playing in the Karuizawa International. Each gender’s field features 15 teams and a purse of 4,000,000 yen (about $48,000 Cdn).

Carruthers, Mike McEwen and Colin Hodgson have former McEwen teammate Matt Wozniak filling in at second. Wozniak, who has stepped away from full-time play, spared for the Brad Jacobs team at last week’s Boost National Grand Slam of Curling event.

Also of note, Carruthers is back to skipping and throwing skip’s rocks. In several events this season, Carruthers and McEwen have traded skipping duties and last-rock responsibility in a few different combinations. Both McEwen and Carruthers have skipped at the Tim Hortons Brier among dozens of other top-tier events, so it’s just a matter of the newly formed squad trying to figure out its best lineup moving forward.

Carruthers won his first two games in the round robin of his five-team pool. While most of the entries are from Japan, the field also includes 2018 Olympic gold-medallist John Shuster from the U.S.

Meanwhile, Edmonton’s Crocker, with Cathy Overton-Clapham, Lori Olson-Johns and Laine Peters, was victorious in her first game of the event. Like the men’s side, most teams are Japanese, but it also includes some international standouts such as Russia’s Anna Sidorova, Scotland’s Sophie Jackson, and South Korea’s Un-Chi Gim.

Of the 15 teams on each side, eight will qualify for playoff rounds beginning on Saturday morning (in North America).

Check curlingzone.com for updated scores and standings from Karuizawa. As well, selected games are being streamed online at https://freshlive.tv/nns/254363

In the final, they defeated Lukas Klima of the Czech Republic.