With the holidays officially over, it’s time for Canada’s competitive curlers to get back to work. 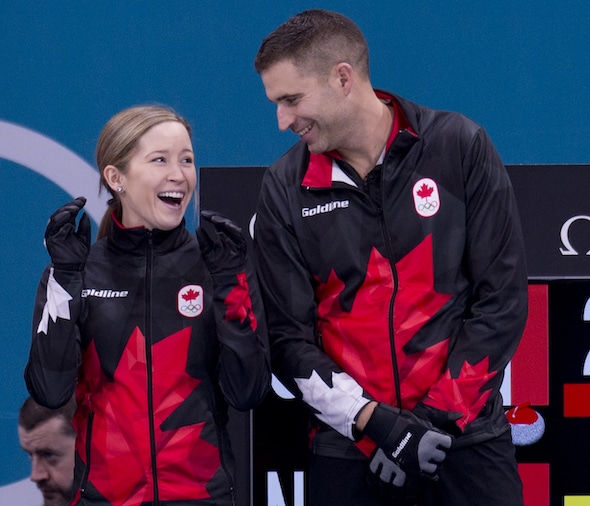 Kaitlyn Lawes and John Morris are off to a fast start at the Qualico Mixed Doubles Classic in Banff, Alta. (Photo, Curling Canada/World Curling Federation/Michael Burns)

While some provinces, such as Alberta, Ontario and British Columbia, have provincial qualifier events, many top players are focusing on mixed doubles this weekend, choosing to play in the 36-team Qualico Mixed Doubles Classic in Banff, Alta.

Olympic gold-medallists Kaitlyn Lawes (Winnipeg) and John Morris (Canmore, Alta.) are currently ranked first in Canada’s Mixed Doubles rankings, and have started the event with two wins. 2018 Canadian Mixed Doubles champion Laura Walker (Edmonton) is playing with her husband Geoff Walker (instead of her usual partner Kirk Muyres), and they are also off to a 2-0 start in pool play.

Jennifer Jones and husband Brent Laing (Shanty Bay, Ont.) have also won their first two in the Cascade pool. The pools are named for some of the famous mountains surrounding Banff. Lawes and Morris are in the Lady Mac pool, while the Walkers are in the Rundle pool. Other pools are Sulphur, Three Sisters, and Grotto.

The competition has no shortage of international teams. Martin Rios and Jenny Perret from Switzerland were Olympic silver-medallists, and 2017 World Champions. They’ve started with two wins. Sarah Anderson and Korey Dropkin, who represented the U.S. at last year’s World Championship, also have two wins. Both of those pairs are in the Three Sisters pool, and will have to face each other before the pool play is complete.

The final 2-0 team is made up of 2015 Canadian Mixed Doubles champion Kalynn Park (C). She’s recently split from her longtime teammate Charley Thomas, and joined with Braeden Moskowy (Regina). They’re in the Lady Mac pool.

Of the 36 teams, 12 will advance to playoffs, and fight for a share of the $30,000 purse. Pool play will wrap up Saturday afternoon, and playoffs with start that evening.

For scores and schedules for this event, and provincial playdown competitions, go to CurlingZone.com.