Three players will head to Prince Albert, Sask., with a chance to make history at the 2019 New Holland Canadian Junior Men’s and Women’s Curling Championships. 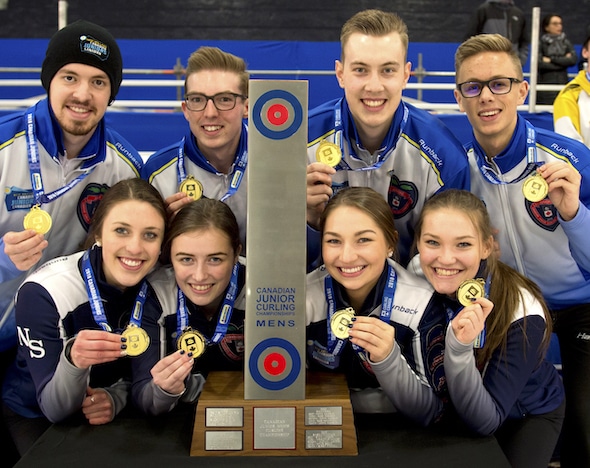 Both gold-medal teams are back from the 2018 event to attempt to defend their titles at the 2019 New Holland Canadian Juniors. And Tyler Tardi (back row, left), Sterling Middleton (back row, second from left) and Karlee Burgess (front row, third from left) have a chance to become the first three-time Canadian junior champions. (Photo, Curling Canada/Michael Burns)

The Canadian Under-21 Championships kick off Saturday at the Art Hauser Centre and the Prince Albert Golf and Curling Club.

Tyler Tardi and Sterling Middleton of the B.C. men’s team, and Karlee Burgess of the Nova Scotia women’s team, can become the first players in the history of the championships to win three times, with Tardi and Middleton having the opportunity to win all three in succession, after winning in 2017 at Victoria, B.C., and last year in Shawinigan, Que., while Burgess’s victories came in 2016 at Stratford, Ont., and last year in Shawinigan.

All three players ended last season as world champions with their victories at the 2018 World Junior Curling Championships in Aberdeen, Scotland.

Tardi and Middleton, the skip and vice-skip respectively for the B.C. team representing the Langley and Victoria Curling Clubs, are joined by a new front end this season, with second Matthew Hall having moved from Ontario, and Alex Horvath taking over at lead (Paul Tardi, Tyler’s dad, remains at coach). Hall’s Ontario team lost to Tardi’s B.C. team in the 2017 gold-medal game in Victoria.

Burgess, meanwhile, is at her familiar second position on the Nova Scotia team from Halifax skipped by Kaitlyn Jones, with Burgess’s cousin Lindsey at lead. New vice-skip Lauren Lenentine replaces the aged-out Kristin Clarke. Karlee Burgess and coach Andrew Atherton are the hold-overs from the 2016 Nova Scotia team, skipped by Mary Fay, that won Canadian and world junior gold.

There will be no shortage of championship experience in Prince Albert; Tanner Horgan’s Northern Ontario team (Sudbury), which lost to Tardi in the final last year, and to Manitoba’s Matt Dunstone in the 2016 final, with a 2017 bronze medal in between is back; his younger brother Jake, who throws third rocks, skipped Northern Ontario to the 2017 Canadian Under-18 title.

The gold-medallist at the 2018 Under-18 Nationals, Nova Scotia’s  Graeme Weagle (Chester), is taking his first crack at an Under-21 national title.

On the women’s side, 2017 Canadian U-18 winner Kira Brunton (Sudbury) is in the field representing Northern Ontario, as is 2018 U-18 runner-up Skyler Ackerman, who is skipping the Saskatchewan Host team from Moose Jaw.

B.C.’s Sarah Daniels will be back, looking to improve on the silver medal she won at the 2016 Canadian Juniors, where she lost the final to Nova Scotia’s Fay team.

For the first time, selected round-robin games from the New Holland Canadian Junior Championships will be streamed live at Curling Canada’s Facebook page, which you can access by CLICKING HERE.

Fourteen men’s and 14 women’s teams will compete for Canadian titles, separated into two seven-team pools per gender for an initial round robin, followed by a Championship Round (top four in each pool) leading to the playoffs. The top team advances to its respective final on Sunday, Jan. 27, while the second- and third-place teams meet in a semifinal on Saturday, Jan. 26, to determine the other finalist.

The winning teams will then represent Canada on home ice at the 2019 World Junior  Championships, Feb. 16-23 in Liverpool N.S. Canada has won a leading 19 world junior men’s titles since 1975 and a leading 12 women’s crowns since 1988.

The 2019 New Holland Canadian Juniors also is notable for the number of past recipients of the Curling Canada Foundation For The Love of Curling Scholarships — 18 over the past three years:

Saskatchewan will have three teams in the field with the added Host team on the women’s side due to the Yukon not sending a team. On the men’s side, Saskatoon’s Rylan Kleiter team will be carrying the home-province hopes. Saskatchewan has won 14 Canadian junior men’s titles (behind only Alberta with 16), the latest by Braeden Moskowy in 2011 at Calgary. Saskatchewan women’s teams have won a leading 11 gold medals, the most recent by Trish Paulsen to complete a Saskatchewan sweep in 2011.

Teams that don’t qualify for the Championship Pool will compete in a Seeding Pool to determine rankings for the 2020 New Holland Canadian Juniors (dates, location, TBA). Curlers on all non-playoff teams will participate in a mixed doubles competition on the final weekend.