Of course not, but after winning its first six matches Thursday – all mixed doubles events – at the Orleans Arena in Las Vegas, they can dream about it.

A clean sweep of the first two draws was not what either side saw coming, but Team World will gladly take the results and hope its furiously hot start continues in Thursday’s evening women’s team competition, and into the week.

Team World, all Europeans, swept the first three morning mixed doubles matchups and were just as good in the afternoon, grabbing three more points and stretching its lead in the race to Sunday’s final to 6-0. It will take a minimum of 30.5 points to win the competition which involves several different disciplines in a Ryder Cup golf-styled event. The quick-out-of-the-gate start signals good things for Team World, which hasn’t won the competition since 2012 and is desperate to halt the slide.

“Our guys have delivered — they’re making a lot of shots and that’s all we can ask of them, really,” said Team World captain David Murdoch. “We said to them to keep the momentum going. We’re in a good place and we feel confident.”

Murdoch said that teaming players of the same nationality has been a big factor in Team World’s success.

“In the past we’ve had a few problems with communication,” he said, “but we’re feeling in a better space here.”

Also caught in Team World’s vice-like grip in the mixed doubles event was the U.S. tandem of Monica Walker and John Shuster who were playing in their own country but couldn’t get much traction in a 6-4 loss to Anna Hasselborg and Oskar Eriksson, another duo of Swedes. 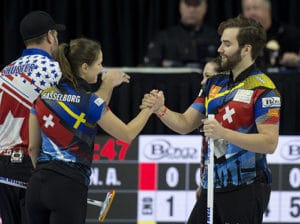 “I think we have a really good team,” she said. “America does too, but we were really pumped and we’re happy to be 6-0.”

Hasselborg said the matching of countrymen has been working.

“It’s easier because we can speak our own language,” she said. “For me it’s comfortable being with Oskar, and he’s a great curler, too.”

“You never know,” he said. “Then you throw tricky ice conditions in there and world-class curlers on both sides so anything is possible. But we gotta start putting some points on the board.”

Shuster said that it’s still early but Team World has one-fifth of the pointed needed to win, so there’s some cause for concern on the Team North America side.