Just when you think that everything is rolling along according to plan, sometimes life throws a curveball. This is exactly what happened to the Quebec women’s team on the first day of competition when coach Michel St-Georges unexpectedly had to have emergency surgery for a detached retina. 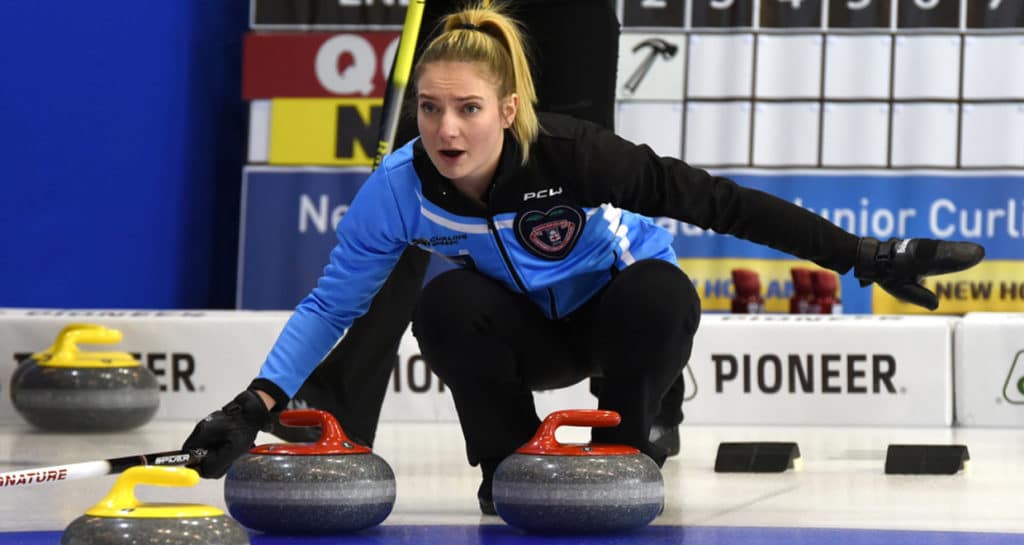 Michel called prior to the opening ceremony and the team’s second game to tell the team the news. “Honestly I was crying and scared. It’s not just my coach, it’s my dad,” said skip Laurie St-Georges. “Every big championship my family has had losses and bad things happen, but we always get through it. It’s just life. We’re just trying to do our best.” Luckily Josée Ricard, mother of Laurie and third Cynthia St-Georges, was able to step into the coaching role. “I was supposed to be in the stands with my hat to cheer them on,” said Josée. “They’re doing great on their own. I’m just there to encourage [the team] and support them. [Michel] hopes to be back for the next game, so we’ll see.” 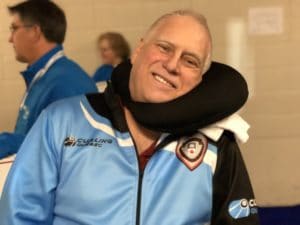 A sign of a strong team is being able to adapt to challenging circumstances and this team has done that in spades. “We’re missing our coach, but my mom is doing so great,” said Laurie. “My sister was also scared, but the other girls have been super supportive. They’re so sweet always asking ‘do you need a hug?’ I can’t ask for more.” The team hasn’t let it slow their game down on the ice, as Quebec posted a 5-3 win over Prince Edward Island’s Lauren Ferguson to extend their undefeated streak to 3-0. But for the team, they’re already looking at the big picture. “We had a talk before this event and we discussed that we have to try to go 6-0 in the first round because the other pool is so strong,” said Laurie. “We have to make key shots. We’re playing well and just have to stay concentrated.” Draw five also saw New Brunswick’s Justine Comeau post a convincing 16-2 win over Northwest Territories’ Tyanna Bain while Kira Brunton representing Northern Ontario downed Nunavut’s Sadie Pinksen 18-2. The game featuring Newfoundland and Labrador and Manitoba came down to an eyeball measurement with Manitoba having the edge for an 8-7 win. This draw saw several tight games on the men’s side with Saskatchewan’s Rylan Kleiter defeating Alberta’s Desmond Young in an extra end, Newfoundland and Labrador’s Greg Blyde improving to 2-1 with an 8-6 win over Ontario’s Sam Steep and Northern Ontario’s Tanner Horgan posting a 7-6 victory over Prince Edward Island’s Tyler Smith. In earlier action today on the women’s side, Alberta’s Selena Sturmay jumped out to a 2-0 start defeating Nunavut 14-2, Northern Ontario defeated the Host team skipped by Skylar Ackerman 7-1, and the defending champions from Nova Scotia skipped by Kaitlyn Jones beat Ontario’s Thea Coburn 8-5. During the morning game on the men’s side, Newfoundland and Labrador had a convincing 11-4 win over Yukon’s Trygg Jensen, and Nova Scotia’s Graeme Weagle picked up his first win of the tournament with an 8-5 decision over New Brunswick’s Jack Smeltzer. Action continues in the 2019 New Holland Canadian Juniors with the final draw of Sunday at 7 p.m. (all times Central). Fourteen men’s and 14 women’s teams are competing, with two seven-team pools in each gender. Following Tuesday night’s games, the top four teams from each pool will move into the championship pools beginning Wednesday, while the other teams will play in seeding pool games to determine the final standings. Round-robin games at the 2019 New Holland Canadian Juniors are being streamed live exclusively on Curling Canada’s Facebook page. TSN/RDS2, the official broadcaster of Curling Canada’s Season of Champions, will provide live and exclusive coverage of the womenʼs and menʼs semifinals on Saturday, Jan. 26, and finals on Sunday, Jan. 27. The same games also will be streamed live in the U.S. on ESPN3. CLICK HERE for streaming and broadcast information. The winning teams Sunday will represent Canada at the 2019World Junior Championships, Feb. 16-23 in Liverpool, N.S. The full scoreboard can be viewed at www.curling.ca/scoreboard/. For event information, visit www.curling.ca/2019juniors. This story will be posted in French as soon as possible at: www.curling.ca/?lang=fr