It’s all in the family for Manitoba’s Zacharias clan

It’s not often you get the chance to compete at the national level with not just one but two of your family members. 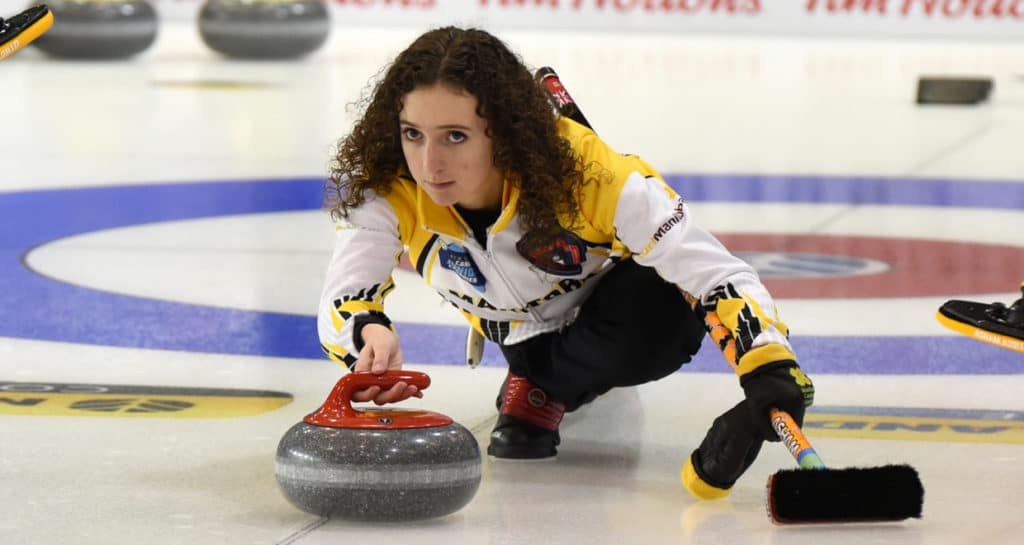 But that’s the case for Mackenzie Zacharias, who is skipping Manitoba’s women’s team at the 2019 New Holland Canadian Juniors with her younger sister, Emily Zacharias, at second and her father, Sheldon Zacharias, on the coaching bench. Curling is, indeed, a family sport — but pushing for a national title together is another matter entirely. “Not many people get to say that they curl with their sister every day and have their dad coach, so that’s pretty awesome,” said Mackenzie. “To get to (compete at the nationals) together is just so special.” Emily said it’s been a goal since the sisters began curling competitively together six years ago. “Honestly it’s like living the dream,” said Emily. “We’ve played together for so long and I can almost read her mind on the ice.” Mackenzie is quick to echo Emily’s thoughts. “We’ve been teammates since I’ve been 12 years old. I think of (Emily) as a teammate and sister. We’ve really got a good balance with that. To be able to call her both is just great.” What’s it like to coach your daughters at a national championship? “All we wanted as parents and coach is to enjoy themselves,” said Sheldon. “I never expected that they would be playing at this level when they first started.” 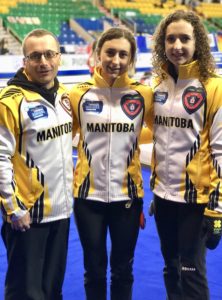 Coaching came about organically, as the curling facility in their hometown of the southern Manitoba community of Altona is run primarily by volunteers. “Once the girls started getting interested (in curling), I stepped in to coach. I had just been a club-level curler before. It’s been a wonderful experience watching them grow as curlers and I’ve kind of stepped along with them, growing as a coach as well,” said Sheldon. Mackenzie said her dad has the right personality and wisdom for the job. “He gels really well with everyone we’ve ever played with. Having him as a coach has been great,” she said. As for their most memorable moment together? “We’ve had so many experiences together and represented Manitoba four times and they’ve all been amazing,” said Emily. “Winning the Optimist International U-18 in 2016 with my sister and dad would be the best.” The Manitobans sit atop of the Pool B standings with a 5-0 record after defeating Prince Edward Island’s Lauren Ferguson 9-3 Tuesday morning. Meanwhile, Northern Ontario’s Kira Brunton and British Columbia’s Sarah Daniels also collided on the morning draw. The game was close until Daniels stole one to grab a three-point lead going into the 10th. B.C. finally ran Northern Ontario out of rocks to improve to 5-1, while Northern Ontario fell to 2-3. On the live-streamed featured sheet, Newfoundland and Labrador’s Mackenzie Glynn had a commanding 12-5 win over Tyanna Bain from the Northwest Territories. Glynn sits at 2-3 with Bain’s Iqaluit-based squad is still searching for a win. On the men’s side, Tyler Tardi’s B.C. team was dominant from the start against Ontario’s Sam Steep. Tardi won 12-2 and remains undefeated at 5-0, while Ontario drops to 3-3. Alberta’s Desmond Young cruised to an 11-5 victory over Nunavut’s Javen Komaksiutiksak. Alberta improves to 3-2 while Nunavut drops to 0-5. Action continues at the 2019 New Holland Canadian Juniors with draws on Tuesday at 2 p.m. and 7 p.m. (CT). Fourteen men’s and 14 women’s teams are competing, with two seven-team pools in each gender. Following Tuesday night’s games, the top four teams from each pool will move into the championship pools beginning Wednesday, while the other teams will play in seeding pool games to determine the final standings. Round-robin games at the 2019 New Holland Canadian Juniors are being streamed live exclusively on Curling Canada’s Facebook page. TSN/RDS2, the official broadcaster of Curling Canada’s Season of Champions, will provide live and exclusive coverage of the womenʼs and menʼs semifinals on Saturday, Jan. 26, and finals on Sunday, Jan. 27. The same games also will be streamed live in the U.S. on ESPN3. CLICK HERE for streaming and broadcast information. The winning teams Sunday will represent Canada at the 2019 World Junior Championships, Feb. 16-23 in Liverpool, N.S. The full scoreboard can be viewed at www.curling.ca/scoreboard/. For event information, visit www.curling.ca/2019juniors.