It was an up-and-down day of wins and losses for Canadian teams led by University of Alberta’s Kristen Streifel and Karsten Sturmay as they battle to stay in touch with the leaders at the 2019 Winter Universiade in Krasnoyarsk, Russia 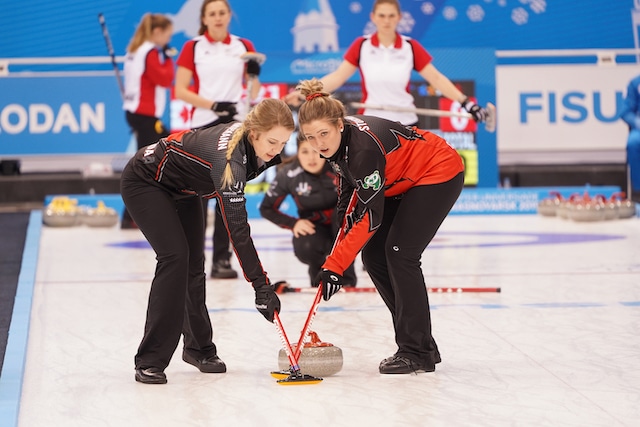 On Monday night, Streifel and her team of vice-skip Danielle Schmiemann, second Selena Sturmay, lead Jesse Iles, alternate Paige Papley and coach Garry Coderre relied on a couple of four-enders to take control over a Swiss team that refused to give up. Leading 8-3 after four ends, Canada then gave up three straight steals before getting back on track with a deuce in nine on the way to a 10-6 win. On Tuesday morning, Canada faced Great Britain’s Sophie Jackson, the Scottish university champion who will also represent Scotland at the upcoming Women’s Worlds in Denmark. Canada fell behind 6-2 after giving up a steal of four in the fourth end, but Streifel and crew battled back. A steal of their own in eight closed the gap to 9-7, but Jackson responded with a three-ender and a 12-7 win for Great Britain. The loss drops Canada into fifth place in the standings, with four games remaining in the round robin. “We started really strong this morning and had a great game against the Swiss,” said Streifel after the evening draw. “We are still trying to figure out the ice and rocks – it’s a little bit tricky out there. We came out a little flat tonight and definitely a nervous game. That’s one we throw out the window and look ahead to tomorrow.” In men’s action, Karsten Sturmay, vice-skip Tristan Steinke, second Chris Kennedy, lead Glenn Venance and coach Rob Krepps lost a 6-5 nailbiter to Russia’s Aleksandr Bystrov in front of a loud hometown crowd. Canada led 4-3 after stealing a point in the eighth, but Bystrov responded with a three-ender, and Sturmay’s single in ten wasn’t enough to close the gap. “It was quite the experience of having a whole arena of thousands of people cheering really hard against you,” said Steinke. “We haven’t experienced that before and it was kind of fun. It was tight and pretty well played game. In the end, we still had a good look in the tenth end to at least have a shot to tie or maybe even shot to win but it’s just the way it fell.” With the loss, the Canadian men are now in fourth place with a 2-2 record, tied with Czech Republic, Norway and Sweden. The round robin continues with the Canadian women playing the Czech Republic’s Alzbeta Baudysova on Wednesday (2 a.m. ET), and the men playing Switzerland’s Yannick Schwaller (Tuesday at 9 p.m. ET) and Sweden’s Fredrik Nyman (Wednesday 7 a.m. ET) Live scoring will be available on the official event website, https://krsk2019.ru/en Additionally, keep checking curling.ca for stories throughout the competition. There will be live streaming of the 2019 Winter Universiade, including selected curling matches, at www.fisu.tv/ as well as FISU’s Youtube channel. For information on the Canadian athletes competing in all sports at the Winter Universiade, go tousports.ca/en/international/universiades/winter-2019