After losing their first four games of the round robin, Team Canada has regrouped to string together five wins, including two more on Thursday at the 2019 World Wheelchair Curling Championship in Stirling, Scotland. 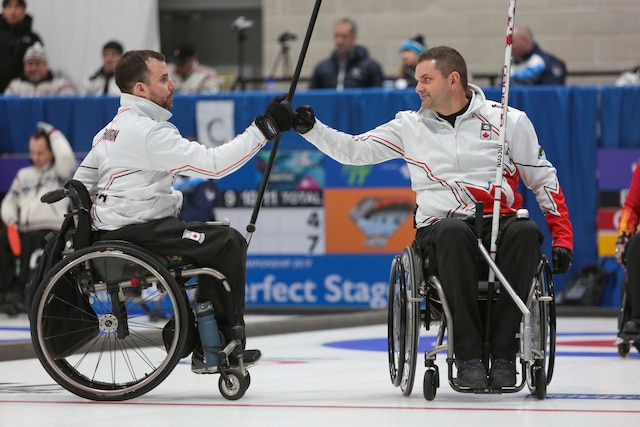 For skip Mark Ideson, third Ina Forrest, second Jon Thurston, lead Marie Wright, alternate Collinda Joseph and coach Wayne Kiel, that turnaround signals a return to confidence and brings a playoff berth closer. “Every game is crucial for us now,” said Ideson after a 7-2 win over Germany’s Christiane Putzich on Thursday morning. “That was another solid win and now we’re starting to find our way. We’re building some momentum. We’re generally on the right side of the coin now and it’s starting to show in our results. Sport’s funny, when things aren’t going well, every break seems to go against you.  But now, we seem to be getting the breaks.” Against the USA’s Steve Emt, the Canadians poured on the offence, stealing two in the fourth and scoring a three-ender in six on the way to a 7-3 win. On Friday, Canada will face Estonia’s Andrei Koitmae at 4 a.m. ET and Scotland’s Aileen Neilson at 2 p.m. ET. The top two teams after the round robin will advance to the semifinals, while the teams finishing in third through sixth place will play in a qualification round (3 vs 6, 4 vs 5) for a berth in the semifinal on Saturday, March 9 (2 p.m. ET). The winners of the semifinal advance to the gold-medal game (March 10, 9:30 a.m. ET), and the losing teams play for bronze (March 10, 5 a.m. ET). For more information about the 2019 World Wheelchair Curling Championship, go to www.worldcurling.org/wwhcc2019