Canada’s Kristen Streifel has clinched a spot in the women’s playoff round and Karsten Sturmay is closing in on a berth in the men’s playoffs as the round robin nears completion at the 2019 Winter Universiade in Krasnoyarsk, Russia. 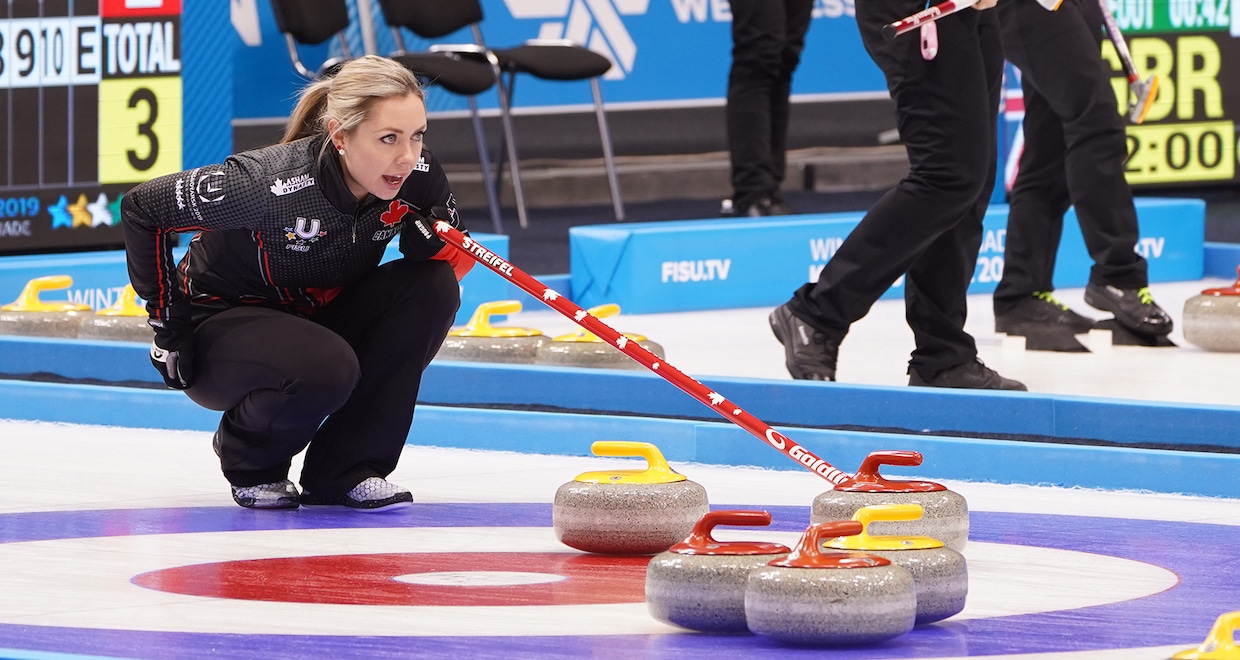 On Thursday morning, Streifel and her team of vice-skip Danielle Schmiemann, second Selena Sturmay, lead Jesse Iles, alternate Paige Papley and coach Garry Coderre won a nail-biter against Russia’s Maria Komarova with a steal of one in the tenth for a 9-8 victory in front of a loud, pro-Russia crowd. “It was a huge day for us and really exciting,” said Streifel after the win. “We knew this morning’s game against Russia would have lots of energy and we turned that loud noise into positive energy for us. We used that momentum of winning into tonight’s game against Italy.” In that evening game, Canada had the edge after a steal of two in the seventh put them ahead 6-3. Italy responded with steals of their own in nine and ten to force an extra end, but when Italian skip Stefania Constantini final draw slid too far, Streifel did not have to throw her last rock and Canada took a single for the 7-6 win. “Italy came out with not a lot to lose,” Streifel said. “We got caught, unfortunately, with some picks but we stayed calm and stayed with it and we were comfortable in playing a close game.” The Canadian women will play their final game of the round robin on Friday against South Korea’s Minji Kim (2 a.m. ET) The men’s playoff picture is still up in the air, but despite a loss on Thursday, Sturmay is still in the mix. He and his University of Albera team of third Tristan Steinke, second Chris Kennedy, lead Glenn Venance and coach Rob Krepps lost 10-4 to Czech Republic’s Jaroslav Vedral and now join three other teams with 4-3 records vying for qualifying positions behind first-place United Kingdom and Switzerland. “Obviously not the result we were hoping for,” said Sturmay. “But at the end of the day we have two games left in the round robin. A win tomorrow puts us in a really good spot and looking forward to a new day. We have had a pretty good run so far in the round robin and (we’re) looking forward to clinching one more win tomorrow at least and securing a playoff spot.” The Canadian men will know how they fit into the playoff scenario after their games with China’s Chenwei Hu (1-6) on Thursday at 9 p.m. ET followed by Norway’s Magnus Ramsfjell (4-3) on Friday at 7 a.m. ET. 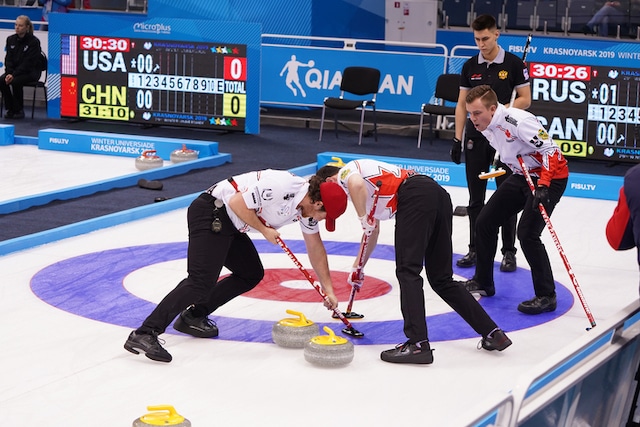 Karsten Sturmay calls to his sweepers during action at the 2019 Winter Universiade in Krasnoyarsk, Russia (International University Sports Federation (FISU))

The top six teams after the conclusion of round-robin play make the playoffs, with the first- and second-place teams getting byes into the semifinals March 9 at 4 a.m. ET; the third-place team takes on the sixth-place team, while the fourth- and fifth-place teams play on March 8 at 9 p.m. ET, with the winners going to the semifinals. The gold- and bronze-medal games are set for March 10 at 3 a.m. ET. Live scoring will be available on the official event website, https://krsk2019.ru/en Additionally, keep checking curling.ca for stories throughout the competition. There will be live streaming of the 2019 Winter Universiade, including selected curling matches, at www.fisu.tv/ as well as FISU’s Youtube channel. For information on the Canadian athletes competing in all sports at the Winter Universiade, go tousports.ca/en/international/universiades/winter-2019