FREDERICTON (U SPORTS) – The playoff picture is becoming clearer at the 2019 U SPORTS/Curling Canada Curling Championships in Fredericton. 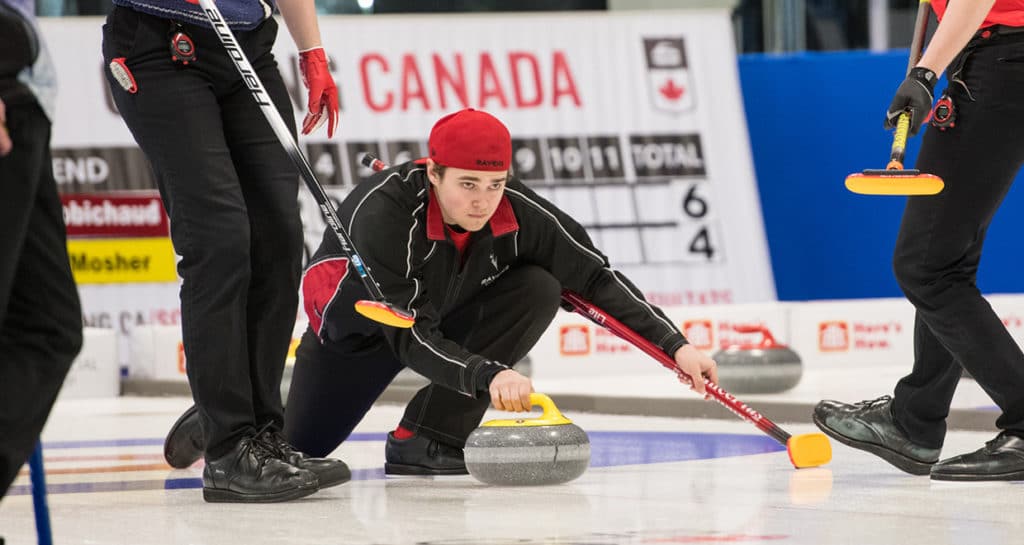 Dalhousie’s Matthew Manuel won a battle of top teams on Sunday afternoon to remain atop the men’s standing, with a 5-1 record.

Dal leads the women’s pack too.

Despite suffering her first loss, Kaitlyn Jones is also 5-1 as the teams head into the final day of round-robin play.

The men were first on the ice on Sunday, and, simply put, some had the luck of the Irish on their side on St. Patrick’s Day, and some didn’t.

Brock’s Sam Steep scored six in the first end and never looked back in an 11-4 win over the host UNB Reds.

“It was huge, we’re a good front-running team,” said Steep. “When you get up six, you’ve just got to make sure you get your forces and don’t give up any steals, and we ran the table there.”

The win was the first for the Badgers, after four losses.

“It’s like a monkey off our back,” said Steep.

The Dal Tigers needed just eight ends to beat the Western Mustangs by the same 10-3 score.

In the closest game of the morning draw, the Alberta Golden Bears gave up four to Memorial in the sixth end, but hung on to beat the Sea-Hawks 8-5.

In the first women’s draw of the day, Laurentian skip Kira Brunton celebrated her birthday with a 8-5 win over the previously unbeaten Tigers.

“We had a really strong start and the girls played really well,” said Brunton. “As soon as we got a steal in one of the ends, we flipped the hammer, which was good for us. We wanted to score at least two in eighth to put us in a good position to win the game.

“This win is pretty big for us. It puts us in a good position moving forward. We don’t have as much pressure in the last two games.”

Queen’s scored four in the first end on their way to a 10-7 win over UNB’s Justine Comeau.

A battle of 4-1 teams highlighted the men’s second draw of the day, with Manuel’s Tigers edging Alberta 8-7.

The Golden Bears stole a single in the ninth end to tie the game 7-7, only to give it back on a missed shot in the 10th.

“We got a little lucky there, we didn’t have to throw the last one,” said Manuel. “To be fair, we had that path down and we were liking that out-turn draw. We cleaned that end up to give ourselves a chance and I feel we would’ve hung in there.”

Memorial scored two in an extra end to beat Western 9-7. 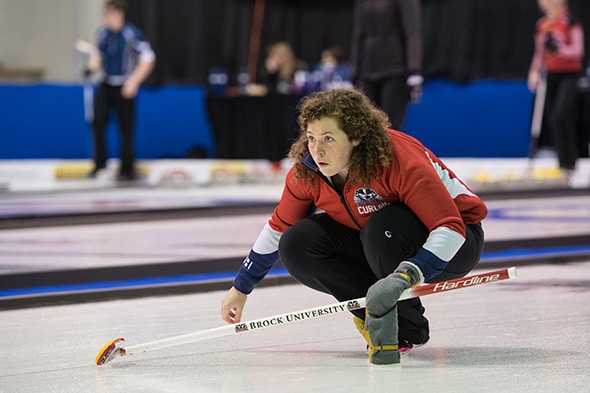 While Dal has locked up a spot in the semifinals, the other three spots are still to be determined.

Even the 3-3 Mustangs have an outside shot, pending the outcome of their Monday morning game against Alberta.

The final draw of the day saw the women’s playoff picture come into a bit more focus, as both Dal and Queen’s improved to 5-1.

The Tigers beat UNB 7-4, while the Gaels scored three in the 10th to beat Laurentian 8-5.

Alberta’s Selena Sturmay stole singles in the eighth and ninth ends in an 8-4 win over Regina.

“We’re super stoked to get another win underneath our belt,” said Sturmay, the skip of the defending national champions. “That win was definitely huge, as we were kind of in a must-win situation going into tomorrow. We’re excited to get that win and excited to play tomorrow and hopefully sneak our way into a semi.”

Brock moved to 4-2, and remains in contention for a semifinal berth, after an eight-end 8-3 win over Mount Allison.

Two of the 4-2 teams, Brock and Alberta, face each other in Monday’s final round-robin draw.