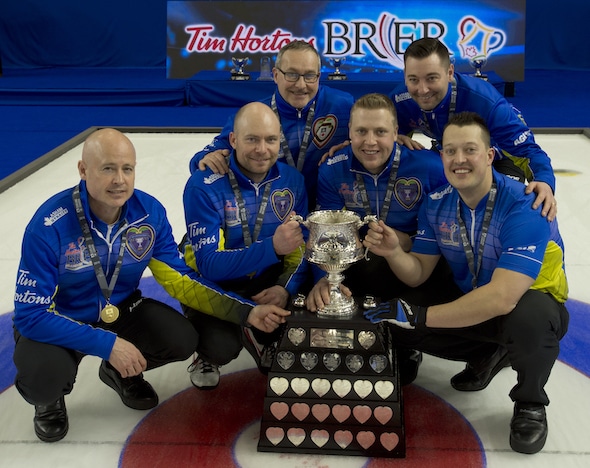 Kevin Koe’s team, which earlier this month won the Tim Hortons Brier in Brandon, Man., with an unbeaten record, plays out of The Glencoe Club in Calgary, and it’s just over two hours, door to door, to get from the Glencoe to the ENMAX Centre in Lethbridge, Alta., which will host the world’s top men’s curling teams beginning on Saturday.

Koe will be pursuing his third world championship, and his first on home soil. His previous two titles came in 2010 at Cortina d’Ampezzo, Italy, and in 2016 at Basel, Switzerland. In fact, it will be Koe’s first opportunity to wear the Maple Leaf on home ice; his other trip to the world championship, in 2014 at Beijing, resulted in a fourth-place finish.

Since 2014, Canadian teams have been on the medal podium four straight times — a bronze won by Pat Simmons in 2015 at Halifax, gold by Koe in 2016, gold by Brad Gushue in 2017 at Edmonton and a silver from Gushue last year at Las Vegas.

But there will be some notable names to get past in Lethbridge for Koe and Co., led by the reigning world champ Niklas Edin of Sweden, who will be pursuing his fourth world title, which would match the record currently held by the legendary Ernie Richardson of Canada.

Also in the mix will be the reigning Olympic champs from the United States skipped by John Shuster, who will attempt to give his country its first world men’s gold medal since Bob Nichols prevailed in 1978 at Winnipeg.

Scotland’s Bruce Mouat team will head to Lethbridge as the European champion after its victory over Edin’s Swedes at Tallinn, Estonia, in November, and is the top-ranked non-Canadian team in the current world rankings (Koe is sitting at No. 1).

Also competing will be the Swiss champs led by Peter De Cruz, who beat Koe in the bronze-medal final of the 2018 Winter Olympics in Pyeongchang, South Korea.

Tickets have been selling quickly since the Team Koe victory at the Tim Hortons Brier; you can purchase tickets by going to curling.ca/tickets.

The opening ceremony, which is free to attend, is scheduled for noon on Saturday at the ENMAX Centre.

It will be the 61st edition of the world men’s championship; Canada has won a leading 36 world men’s titles, and Canadian teams have reached the podium 53 times in those 60 previous world championships, collecting 10 silver and seven bronze to go along with the gold medals.

The 2019 Pioneer Hi-Bred World Men’s Championship will feature a 13-team field. Round-robin play will run through to Friday, April 5, with the top six teams making the playoffs; no tiebreakers will be played, so ties for playoff spots will be broken based on head-to-head results, and if that doesn’t resolve the tie, then the pre-game Last-Shot Draw distances.

The top two teams from round-robin play will be seeded directly into the semifinals, while third will play sixth and fourth will play fifth in the quarter-finals on April 6.

Also on tap during the 2019 Pioneer Hi-Bred World Men’s Championship will be a World Curling Hall of Fame induction ceremony for the late legendary Canadian curling photographer Michael Burns Sr. The ceremony will take place during the fifth-end break of the first semifinal on April 6, with Michael Burns Jr., the longtime photographer of Curling Canada, accepting on behalf of his family.

TSN/RDS2, the official broadcast partners of Curling Canada’s Season of Champions, will provide live coverage of Canada’s round-robin games, in addition to all playoff games. CLICK HERE for their complete broadcast schedule.

The list of teams, schedule information and live scoring can be found on the event website, www.curling.ca/2019worldmen/.