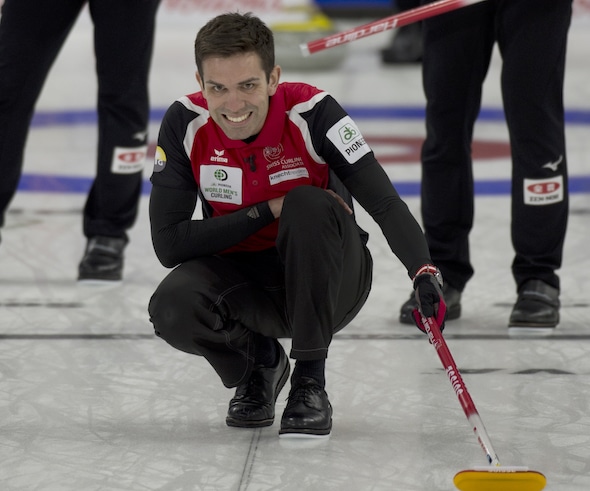 “Maybe a little bit of luck, maybe a little bit of experience at this level,” de Cruz said when asked what the difference in the game was. “We’ve been in these situations a few times, so we know how to manage them.” de Cruz, vice-skip Benoît Schwarz, who throws fourth stones, third Sven Michel, lead Valentin Tanner, alternate Claudio Pätz and coach Thomas Lips, rebounded from a tough 6-5 loss to Italy earlier in the day. With both teams still looking at grabbing one of the two top spots in the round robin to avoid the qualifying games, neither was willing to take many risks. Consequently singles were the order of the day with the Swiss getting theirs in the first, third, fourth and seventh ends. Japan countered with singles in the second and sixth ends and cracked a deuce in eight when Schwarz twice tried double take-outs and each time got only one. That left Matsumura an easy draw for two. Schwarz executed a tight double tap-back in nine for one, giving Switzerland a 5-4 lead into the 10th, but without hammer, which Matsumura, third Tetsuro Shimizu, second Yasumasa Tanida, lead Shinya Abe, alternate Kosuke Aita and coach Bob Ursel used to tie the game.

Schwarz had a straight-forward hit and stick with final stone in the extra for the win. “Definitely it’s important for ranking at the end,” de Cruz said of the victory. “If we’re tied with them then the win is going to count.” Head-to-head result is the first tiebreaker. Meanwhile, Edin, seeking a record-tying fourth world title, had his hands full with SooHyuk Kim of South Korea (0-10) before getting a key 7-5 win to take over top spot in the standings.. With third JeongJae Lee playing skip, the South Koreans stole one in the first end and after giving up a steal of two to Sweden in the third, got two back in the sixth to pull even at 4-4. But when Lee’s draw with his final stone slid to the back of the house, Edin was left with a straight hit and stick for three to grab control of the game. “We expected a good game,” Edin said of the South Koreans. “I actually thought Korea would be in the playoffs. He can make all the shots, too, but sometimes they make a few easier mistakes.” Like the heavy draw in seven? “Yeah, definitely. They placed their first rock well, it was tricky to get out of there, so we had to take our chances. It was either going to be a steal or a three.. when he drew a little heavy it was an open hit for three.” Bruce Mouat of Scotland (5-4), last year’s bronze-medal winner, kept alive his faint playoff hopes by scoring four in the 10th end to sneak by Qiang Zou of China (2-8) 9-6. Marc Muskatewitz of Germany (3-7) posted a trio of three-enders on the way to a 12-6 win over Sergey Glukhov of Russia (3-7). The round robin wraps up Friday evening with the top six teams advancing to the playoffs. The first- and second-place teams move directly to Saturday’s semifinals while the next four teams play qualifying matches Saturday morning. The 2019 Pioneer Hi-Bred World Men’s Curling Championship continues with tonght’s draw today at 7 p.m. (all times MT). Live scoring, standings and statistics for the 2019 Pioneer Hi-Bred World Men’s Curling Championship are available at wmcc2019.worldcurling.org/ TSN and RDS2 will provide complete coverage of the 2019 Pioneer Hi-Bred World Men’s Curling Championship. CLICK HERE for the complete schedule. For ticket information for the 2019 Pioneer Hi-Bred World Men’s Curling Championship, go to www.curling.ca/2019worldmen/tickets/ This story will be available in French as soon as possible at www.curling.ca/2019worldmen/?lang=fr