Canada’s Jennifer Jones and Kevin Koe ended their seasons on high notes by topping the competition in the women’s and men’s events at the Curling World Cup Grand Final in Beijing. Both teams ensured their victories thanks to some timely steals throughout the day. The Canadian team of Laura Walker and Kirk Muyres finished second overall in the mixed doubles competition. 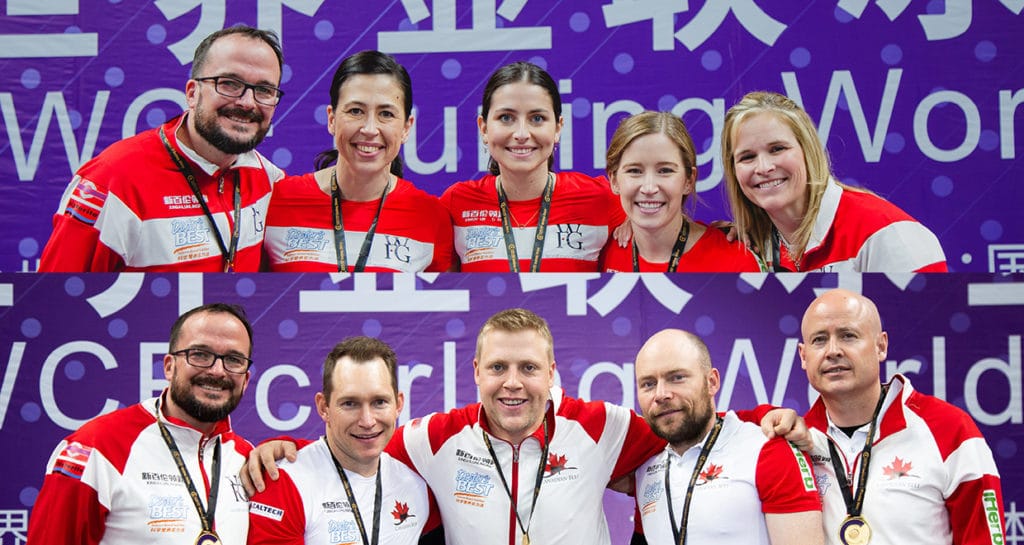 Canada’s Jones (Winnipeg) knew that by competing at the event she was going to be away from daughters Isabella and Skyla on Mother’s Day, so defeating Switzerland’s Silvana Tirinzoni 9-6 to win the Grand Final title did provide some solace on Sunday.

“It’s a great way to end the season. I was a little bit sad to be away on Mother’s Day, but this makes it a little bit better,” Jones said.

Canada started the game hot with back-to-back steals in the first two ends for an early 3-0 lead. However, Switzerland’s two three-enders during the competition gave the team a late-game advantage that Jones, vice-skip Kaitlyn Lawes, second Shannon Birchard and lead Jill Officer had to overcome.

Trailing 6-5 in the seventh end, Canada regained the lead with a draw for two and put the game away in the final end with a steal of two. Sitting two well-guarded stones on the button, Canada forced Switzerland to play a difficult redirect shot to score, which it missed. 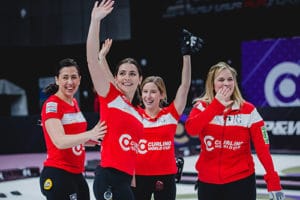 “Shannon made two beauty draws in the last end and that kind of set up the steal for us,” Jones said.

Team Jones replaced Team Homan in the Grand Final because both Homan and second Joanne Courtney are pregnant. Birchard and Officer filled in for the regular front end of Jocelyn Peterman and Dawn McEwen who were unable to play due to prior commitments. The trip to Beijing paid off for Jones and her team; they received $27,000 US for winning the final, plus an additional $10,000 in round-robin winnings.

“It was such a battle out there and we made a lot of big shots when we had to. We hadn’t played with Shannon and Jill in a while and to come out on top is a pretty great feeling,” Jones said.

Leading by one point with hammer in the final end, Koe, vice-skip B.J. Neufeld, second Colton Flasch and lead Denni Neufeld drew up to a Chinese counter on the side of the button to score one and secure the win at Shougang Arena.

“We played well, we weren’t in a lot of trouble and they seemed to play to keep it close, but we had a couple of big steals and we were where we needed to be at the end, with hammer, and we played a good end,” Koe said. 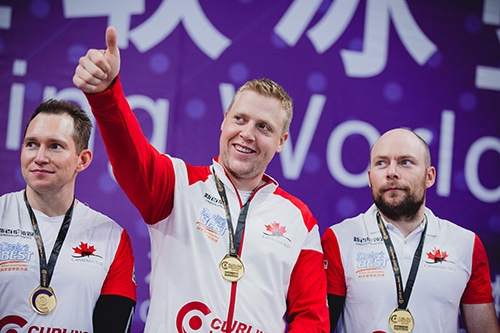 Neither team scored more than one point in any given end, meaning two steals of one in the third and sixth ends by Canada was the biggest difference in the game. In the third end China missed a double attempt and provided Canada with a steal of one. In the sixth end Canada played a draw up to China’s shot stone to sit one behind cover. China tried to follow the same path into the house but it was too heavy.

The win caps off what has been an outstanding season for the team’s new lineup (regular lead Ben Hebert was unable to attend due to prior commitments). Team Koe won two Curling World Cup events, a Tim Hortons Brier title and had a silver-medal performance at the 2019 Pioneer Hi-Bred World Men’s Curling Championship.

“Super happy, I mean we’ve had a great year and to end it off with a win here, I mean this has just been a great event, all week,” Koe said. “We’ve been very impressed with these World Cup events and it feels good to win the finale.” 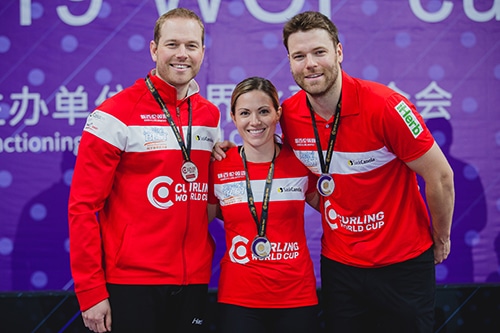 Canada’s mixed doubles team of Walker and Muyres (Edmonton and Saskatoon) lost their mixed doubles final game 8-3 against Norway’s Kristin Skaslien and Magnus Nedregotten. Canada couldn’t convert with the hammer throughout the game, scoring one point in the first, fourth and sixth ends. Meanwhile, Norway’s Olympic bronze-medallist pair made efficient use of the hammer, scoring three in the second, two in the fifth, two in the seventh and an additional steal of one in the third end.

“We are pretty happy to reach the final here in Beijing, but they played the better shots over the course of the game. We had a lot of must-win games this week and have to be pleased with the way we played,” Walker said.

Waker and Muyres earned $6,500 for their runner-up result in the final, plus $7,000 for their round-robin victories.

View the full schedule and all teams competing at the final leg in Beijing by CLICKING HERE.