Jaedon Neuert is a 17-year-old curler from Winnipeg who will compete for Canada at the 2020 Youth Olympic Games in Lausanne, Switzerland, next January. This is the first in a series of stories where Jaedon will share his Youth Olympic Games experience from making the team to representing Canada for the first time in his career. 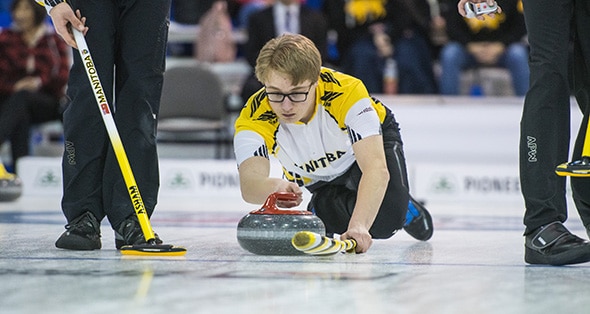 Jaedon Neuert of Winnipeg represented Manitoba at the 2019 Canadian Under-18 Curling Championships as vice-skip. His team won bronze at the event and shortly after he was selected to represent Canada at the 2020 Youth Olympic Games. (Photo, Curling Canada/Infinite Eye Photography)

For as long as I can remember, my second home has been a curling club. My parents would curl in fun leagues around Winnipeg, at clubs like West Kildonan (now closed), the Heather and also St. Vital (home of Jennifer Jones). I would be there on Friday and Saturday nights almost every weekend, sitting around eating a hot dog with ketchup only and fries downstairs waiting for my parents to come off the ice so I could go upstairs or leave the curling club and go home. So to no real surprise, when I was five years old my parents asked me if I would like to register for a junior program so I could start my curling career. I started curling at St. Vital Curling Club in the junior league from three to five o’clock every Saturday.

Over the years I developed my skills playing on three-quarter length sheets of ice and eventually upgraded to a full sheet playing against older kids, gaining experience at bonspiels in Winnipeg and around Manitoba. My current skipper, Jordon McDonald, and I played against some of the top U21 teams from Manitoba and the United States and while they were all close games, we came out on the wrong side of them. But that got my competitive side going. 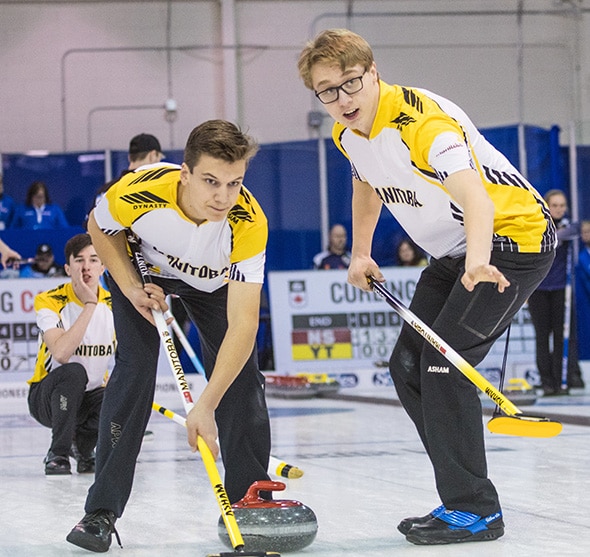 Jaedon Neuert, right, is sharing his experience as a member of Team Canada through a series of blog posts as he prepares for the 2020 Youth Olympic Games in January. (Photo, Curling Canada/Infinite Eye Photography)

A week later after winning provincials, my dad told me about applying for the Youth Olympics Games. All I had to do was write a 500-word essay about why I wanted to participate at the Games for Canada. That essay was the best written and most re-read essay I may ever have in my school years (high school and university), and I liked what I wrote. I thought I had a good chance, but that part was only 20% of the application process. The other 80% was happening when I was in Sherwood Park, Alta., for the U-18 nationals event. Curling Canada was watching applicants on and off the ice and would pick the team based on the application and what they saw over the week.

Before I went to Nationals my mom told me some of the best advice I’d ever received: talk to everyone there and have fun. That’s what I did, and I made so many new friends from across the country. Sunday was finals day and awards day and I was fortunate enough to be selected for the sportsmanship award in my pool, voted on by the players. We were in the bronze-medal game against Nova Scotia and won. We were all ecstatic about finishing third in the country.

When I came home from Sherwood Park I kind of forgot about the Youth Olympic Games application for a week. Then I received an e-mail from Curling Canada saying it would be calling the chosen ones for the Games on April 15th between 6-6:30 pm central. “Lucky” for me I had a physics test and a history quiz the next day that I was studying for that evening. At 6 pm my parents called me upstairs and we sat at the kitchen table waiting for the phone. Fifteen minutes later it rang and I picked that phone up so quickly it could’ve been a new world record. My parents still bug me to this day that it’ll be the only time I’ll ever pick up the phone.

It was Curling Canada they congratulated me on being selected for the team. At that instant my whole body started shaking. My parents came over to listen and my mom shoved a notepad in front of me and got me to write down all of the information I was being told. I hung up, gave my parents a hug and went back downstairs, trying to refocus on studying.

Later that evening coach Helen Radford called to congratulate me and told me who else was on the team: Lauren Rajala (Northern Ontario), Emily Deschenes (Ontario) and Nathan Young (Newfoundland & Labrador).

I had to keep the news quiet for a few days until the official release, which was really hard to do. The news went around my school so quickly and I got the most congratulations I think I will ever get. The next day I was in the Winnipeg Free Press and my dad texted me to say that the radio station CJOB wanted to interview me. I was so happy because I’d never been interviewed before. My first interview went not bad, but not great. But that was okay because I know there will be more to come.

While we had been in touch online, the team met for the first time four months later at the Curling Canada NextGen camp in Waterloo, Ont.