In the end, the champs were still champs and the rookies were still rookies. And, perhaps, both looked the parts. 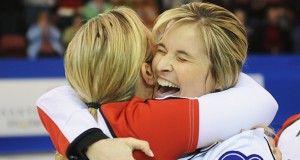