You got a pretty early clue this morning that this wasn’t your average bonspiel. The lineups outside the Vancouver Olympic Centre were massive, even as the games were already underway. 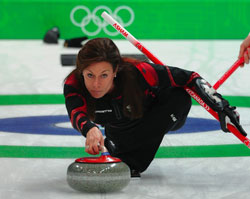 And inside the building, there was a genuine electricity as Team Canada took to the ice for their Olympic debut against Norway’s Thomas Ulsrud. Your Insider has been to a few major events over the years and I’ve never heard this kind of noise for a shot in the second end of the first draw of competition when Kevin Martin scored three. My advice to everybody who has tickets to the curling — get here as early as possible!!! If you think you can arrive 15 minutes before the game starts and take your seat in time for the first rock, you will be disappointed. Vanoc organizers have been telling fans for weeks to get to the venues early, up to two hours before the game starts, and based on what we saw today, there’s a good reason for that. There’s lots of security checks and tickets have to be scanned one at a time. The Canadian teams have really been taking in the Olympic experience over the last few years. The men arrived on Monday and started practising immediately at the Royal City club in New Wesminster, and they want to pass along their thanks to the members and management at Royal City for their amazing co-operation! Of course, everybody knows Kevin is a bit of a perfectionist when it comes to ice, right??? So for every practice, he got out there 45 minute early and prepared the ice himself! And you just know that if there were any flaws, Benny Hebert, Marc Kennedy and John Morris were letting him hear about it!! Cheryl’s team arrived on Wednesday, and also had a couple practice sessions at Royal City to get ready for Tuesday’s games, and both Canadian teams had an absolute blast inside the Athlete’s Village. Cheryl said she was a little worried about her team being accused of stalking the hockey players! Highlights include Cheryl getting her picture taken with Wayne Gretzky (but, for some strange reason, forgetting to ask him for his autograph — what’s up with that, Cheryl?) and Cori Bartel and Susan O’Connor tracking down Jari Kurri for an autograph to give to their Oiler-fan husband (Susan is married to Todd Brick) and fiance (Cori is engaged to get married to Sean Morris in July). Both teams moved out of the Athlete’s Village on the weekend so that they get could have a place to relax away from all the hubbub, but before they left, they were able to march in the Opening Ceremonies on Friday, and they all still have chills going down their backs! And wouldn’t you know it? There on Saturday’s front page of the Vancouver Sun was our very own Paul Webster, the national development coach for the CCA and an assistant coach for the Canadian men’s team. Way to show off those pearly-whites, Paul! Finally, it was game time on Tuesday, and it was an amazing atmosphere in the building. “The fans out there — can you believe that at a curling game? It was fantastic,” said Marc after the game. “To have that many people passionate about curling — it’s fantastic for our sport.” Your Insider couldn’t agree more. Keep checking back here throughout the Olympics as we give you the inside scoop on what Team Canada and their fans are doing in Vancouver over the next two weeks. It’s going to be amazing!