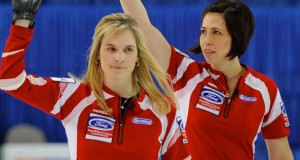 The medal was the second in four world championships for the Canadian unit from Winnipeg — third Cathy Overton-Clapham, second Jill Officer and lead Dawn Askin. Jones won the gold medal in the 2008 renewal at Vernon, B.C.  Prior to today’s 11th victory in 14 world championship matches here, the Jones team had lost bronze medals in 2005 and 2009. “It’s a nice way to finish off the week,” said the 35-year-old Canadian skip. “We’re pretty happy to be on the podium. I thought we bounced back and played well today. We had a couple bad ends, but  . . . a medal is always nice.” Jones defended her team’s overall playoff record. “Our team always peaks in the playoffs,” she said. “We’ve missed in a couple of world events but this team is a playoff team. I think everybody is just over-analyzing a bit too much. We came out with a medal and had a great round robin. We played great. I think we’re pretty proud of that. “Of course, we obviously didn’t play well (in Saturday night’s semi-final against Scotland) and had a hard time sleeping. But we wanted to come out here and win a medal. We wanted to come out and have fun and enjoy the atmosphere. To have one more game in front of this crowd was great.” The first five ends Sunday constituted primarily five separate mini-games of hide and seek. Canada stole points in the third and fourth ends for a 3-1 lead but Sweden replied in the fifth with single. Then the Swedish skip made a killer blunder in the sixth, promoting a Canadian rock to a counting position and re-arranging a tight cluster of crockery that left Jones with a spectacular running double to score four. The Swedes gamely battled back to match those four points but that’s as close as they would get. Ostlund missed her last stone of the ninth and Jones drew the four-foot to count a pair, then ran Sweden out of boulders in the final exchange. “Right after the game we were unhappy,” said the blonde Swedish skip, “but we are really proud to have been in the playoffs. When we came here, our goal was top-six and we made fourth place so we definitely will be back. “It was a really good experience being here and just watching all the good curlers. We were here to learn from them, especially Jennifer’s team and Eve’s (Scotland) and Andrea’s (Germany) team, they have played a lot.  We will take this home and plan to come back and win the gold medal.” Germany’s Andrea Schoepp and Scotland’s Eve Muirhead will contest the championship’s gold-medal match today at 3 p.m. “Third in the world is not so bad,” said Jones. “It just wasn’t meant to be. Sometimes, that’s just the way it is.  To be a four-time Canadian champion, to be in the world championship four times, to win Players’ Championships, we’ve done more than I’ve ever dreamed possible. Ever. “And we’ve gotten to play two Worlds at home. And it’s been an amazing ride. And for everybody to expect you to win gold (every time) is ridiculous. We came out here and we won bronze and we’re really happy with that.”