WCF and CCA deal on future of World Championships in Canada

PERTH, SCOTLAND – The World Curling Federation (WCF) is pleased to announce that it has signed a new agreement with the Canadian Curling Association (CCA) which will see Canada hosting the World Women’s Championships in 2012 and 2014 and the Men’s World Championship in 2013. 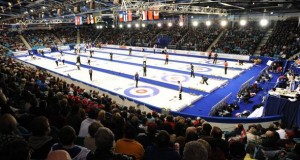 The deal is for a minimum of three years and provides the CCA with the first right of refusal for renewal. The sites for the events in 2012, 2013 and 2014 will be determined by the CCA in consultation with the WCF. The agreement has the approval of the WCF’s worldwide marketing partner, Infront Sports & Media. The international sports marketing agency, based in Switzerland, has formed a separate partnership agreement to work with the CCA during this period. Under the new agreement, the Canadian sports TV channel, TSN, will continue to hold the exclusive broadcasting rights in Canada for the world curling championships. “The WCF is delighted to have signed an Agreement which will run to 2014 with our largest Member, the Canadian Curling Association,” stated WCF President Kate Caithness. “This will ensure that alternating World Championships will continue to be held in Canada and will be a joint operation between the WCF and CCA.” “I am thrilled that the WCF, CCA and Infront Sports & Media have agreed on a unique concept which will allow the CCA to manage and operate these world events, on behalf of the WCF, and to leverage the marketing rights to Corporate Canada and beyond,” explained Greg Stremlaw, Chief Executive Officer of the Canadian Curling Association. “I would like to thank the CCA’s project team that worked tirelessly on this partnership agreement and express my sincere appreciation to Kate Caithness, WCF President, for her cooperation and involvement.” In a break with past arrangements between the WCF/CCA and committees organizing World Championship events in Canada, the new agreement now sees these host committees receiving a percentage of gross ticket sales. The CCA will also own the presenting sponsor position for all world men’s and women’s events held outside of Canada. About the WCF The World Curling Federation (WCF) is the international sport federation governing the Olympic winter sport of curling and the Paralympic winter sport of wheelchair curling with headquarters in Perth, Scotland. The WCF represents 46 Member Associations and is generally acknowledged to direct one of the fastest-growing international winter sports. About the CCA The CCA manages a number of Canadian curling championships, including the Tim Hortons Brier, Tim Hortons Roar of the Rings, Scotties Tournament of Hearts, Canada Cup and the M&M Meat Shops Canadian Juniors. Additionally, the CCA partners with the World Curling Federation in hosting the World Financial Group Continental Cup and the Ford World Curling Championship (men or women), when held in Canada. Future World Curling Championship dates and venues: – Capital One World Women’s Curling Championship 2011, Esbjerg, Denmark 19-27 March 2011 – Ford World Men’s Curling Championship 2011, Regina, Canada 2-10 April 2011 – World Men’s Curling Championship 2012, Basel, Switzerland 31 March – 8 April 2012 More information on: https://www.worldcurling.org https://www.curling.ca Or please contact: Joanna Kelly Media Relations Officer World Curling Federation [email protected] +372 592 442 35 Greg Stremlaw Chief Executive Officer Canadian Curling Association [email protected] +1 613 834 2076 ext. 117 +1 613 799 9993 (mobile)