This week’s Male Athlete of the Week is Olympic Gold Medallist, Marc Kennedy of Edmonton, Alberta. 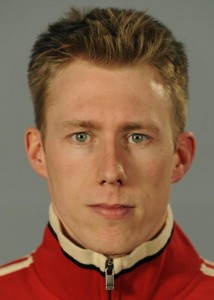 Birth date: February 5, 1982 Birthplace: St. Albert, Alberta Hometown: Edmonton, Alberta Curling Club: Saville Sports Centre, Edmonton, AB Current Team: Team Kevin Martin Position: Second Delivery: Left Nickname: Kenbear Getting to Know Marc Kennedy Marc has been enjoying success in the sport of curling for as long as he can remember, but he’s achieved his greatest level of fame over the past few seasons as the hard-throwing second for Kevin Martin’s Edmonton team. Kennedy and Martin used to practise together at the Saville Sports Centre in Edmonton before they teamed up (Kennedy was working for Martin at his curling and tennis supply shop at the Saville), and it seemed to be only a matter of time before they made the partnership permanent. Joining with third John Morris and lead Ben Hebert, the Martin team has dominated the sport over the last four years. They won Brier titles in 2008 at Winnipeg and 2009 at Calgary, going unbeaten in both events, and also won the world championship in 2008 at Grand Forks, N.D. Then came the ultimate success last season, when Team Martin triumphed at the Tim Hortons Roar of the Rings in their hometown of Edmonton, then went on to claim Olympic gold in Vancouver, beating Norway’s Thomas Ulsrud in the gold-medal game. In addition to his work on the ice, Kennedy is active in helping develop the game. He contributes his time at various youth clinics and camps, but always finds time to be at home with his wife and daughter! Quick Hits with Marc Kennedy Do you have any superstitions? “You don’t change a pair of winning socks!” Three people, living or not, whom you would invite to a dinner party: “Wayne Gretzky, Muhammad Ali, and John F. Kennedy.” If you could be a star any other sport, what would it be, and why? “Hockey, because I’m Canadian!” If you could change any rule in curling, which one would it be, and why? “The defending champion (Team Canada) being represented at the Brier.” What music do you like to listen to before a game? “I’m Albertan, I’m a country boy.” Favourite: – Website? “tsn.ca” – Order from Tim Hortons? “Double double” – Vacation destination? “Cape Breton” – Junk food? “Chocolate“ Do you have any pet peeves? “Bad drivers, and eating with your mouth open.” Three things you always travel with? “Cell phone charger, contact solution, and iPad.” First thing on your Bucket List? “Visit Scotland, for a vacation, not curling.” Favourite pastime between draws at cashspiels? “Sleep, eat, cards, sleep, eat, cards.” One thing most people don’t know about you? “I have a black belt in karate.” What is the biggest misconception about curlers? “That we drink a lot . . . well . . . maybe they’re right (just kidding!). Also, that we are not athletes.” Your ideal shot to win an Olympic gold medal: “Up three coming home, wide open outturn hit.”