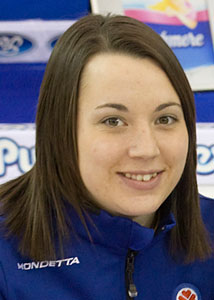 Birthdate: July 9, 1987 Birthplace: Redvers, Sask. Hometown: Vegreville, AB, and Maryfield, Sask. Curling Club: Saville Sports Centre, Edmonton, AB Current Team: Team Sweeting Position: Skip Delivery: Left Nickname: Sweet Thang Getting to Know Val Sweeting Val Sweeting’s Edmonton team was not regarded among the favourites when the Alberta Scotties Tournament of Hearts provincial women’s curling championship got under way last January at the Calgary Curling Club. But in a field that included star skips such as Shannon Kleibrink, Cathy King and Crystal Webster, Sweeting, third Megan Einarson, second Whitney More, lead Lindsay Makichuk and coach Carmen Einarson pulled off one of the biggest upsets in Alberta curling history. It was no fluke, though. On the final day of the competition, Sweeting knocked off King in the semifinal, then made a short runback takeout to beat Kleibrink in an extra end to earn a trip to the national Scotties in Sault Ste. Marie, Ont., where the team would eventually finish with a 4-7 record. Sweeting had had some success prior to that massive victory in Calgary; while attending university, she won a Saskatchewan junior championship playing vice-skip for Hailey Surik in 2007, and also played in the 2006 Canadian university championships. She also gives back to the sport; she was a volunteer curling coach at St. Mary’s high school in her hometown of Vegreville, AB, and also volunteers with her hometown curling club’s junior program when she has time. Sweeting will take a new-look team into the 2010-11 season; Leslie Rogers, who served as the team alternate at the national Scotties, will step in at third rocks, while Einarson and More will comprise the front end. Quick Hits with Val Sweeting Do you have any superstitions? “I slide twice before every game. If we’re winning, I try and keep everything the same (pants, shirts, etc). Don’t worry, we change our socks and underwear!” Three people, living or not, whom you would invite to a dinner party. “My Grandma Sweeting, my uncle Allan Harrison and my cousin Mike Harrison – because I didn’t get to say good-bye.” If you could be a star any other sport, what would it be, and why? “Is Beersbe a sport? No? OK, then I pick Bossaball – it looks like fun.” If you could change any rule in curling, which one would it be, and why? “I think all the rules are pretty good. I’m not sure how I feel yet on the new rule about the time clocks not stopping for a time-out. But I’ll let you know.” What music do you like to listen to before a game? “My Wish by Rascal Flatts; Airplanes by B.O.B.; at the Scotties it was Empire State of Mind.” Favourite: – Website? “I don’t really have a favourite, but I like getting home improvement tips and ideas (things I will do after I win more money than my teammate, Leslie, on the Lotto Max… yes, it’s going to happen!)” – Order from Tim Hortons? “Mmm . . . hazelnut iced coffee (in the summer) and mocha or caramel hot smoothie (in the winter).” – Vacation destination? “If there ever comes a day where curling doesn’t use all my vacation days, I will go anywhere hot.” – Junk food? “I’m a sucker for chips . . . and anything with caramel.” Do you have any pet peeves? “When people feel the need to update their Facebook status every minute of every day.” Three things you always travel with? “If I’m not flying, I always bring my pillow; toothbrush (that is when I don’t forget it!); cell phone.” First thing on your Bucket List? “I’m 23; I don’t have a Bucket List! But I would like to go skydiving at some point.” Favourite pastime between draws at cashspiels? “Napping, eating and/or socializing.” One thing most people don’t know about you? “I usually get ideas for these questionnaires from my coworkers.” What is the biggest misconception about curlers? “I have NO idea! (my co-workers couldn’t think of one either, other than: Young curlers CAN pull through, even when you least expect it).” Your ideal shot to win an Olympic gold medal: “I’d take a short runback (seemed to work out for us a few times last year) or a draw to the four-foot.”