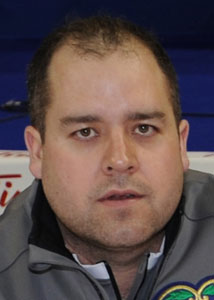 Birthdate:  November 3, 1977 Birthplace:  Yellowknife, N.W.T. Hometown:  Yellowknife, N.W.T.| Curling Club:  Yellowknife Curling Club Current Team: Team Jamie Koe Position:  Skip Delivery:  Right Nickname:  JK Getting to Know Jamie Koe A member of curling’s First Family of the Far North, the man universally known as JK has filled up a closet with team jackets from the Territories. Koe – the younger brother of world men’s championship skip Kevin Koe and the twin brother of multiple-time Territorial women’s champ Kerry Galusha – has played in four Tim Hortons Briers, three national mixed championships and six Canadian junior men’s championships. Arguably his most memorable experience at the nationals was in 1994 when he and Kevin came oh-so-close to giving the Territories its first Canadian curling championship when they lost on the last rock to Alberta’s Colin Davison in the final of the national juniors. He and Kevin continued their partnership when they lived in Calgary, but Jamie took over his own team when he moved back north, and has been the dominant men’s skip over the past half-decade in the Land of the Midnight Sun, and fell just one win short of the playoffs at the 2006 Brier in Regina. While work, family and the occasional trip south to play at an Asham World Curling Tour event keep Koe busy, he’s also put in some time behind the scenes over the years, including stints on the board of directors of the Northwest Territories Curling Association as well as the Yellowknife Curling Association board. Quick Hits with Jamie Koe Do you have any superstitions? “Very superstitious, lately we have been running out of new driving routes to Brier games.” Three people, living or not, whom you would invite to a dinner party. “The Ledrews and the Captain.” If you could be a star any other sport, what would it be, and why? “Golf; much nicer weather than the curling season.” What music do you like to listen to before a game? “ABBA.” Favourite: – Website?  “Hockeybuzz.com” – Order from Tim Hortons?  “Apple juice” – Vacation destination?  “Las Vegas” – Junk food?  “Bud Light” Do you have any pet peeves? “People who hem and haw over how to pay for something after they see the price . . . then find that method of payment . . . very slowly . . . meanwhile, I’m always in a rush that really grinds my gears.” Three things you always travel with? “Blackberry, spare blackberry and wallet.” First thing on your Bucket List? “Travel the world.” Favourite pastime between draws at cashspiels? “Texas Hold-’em, NHL hockey and NFL football.” One thing most people don’t know about you? “I’m a pretty shy guy.” What is the biggest misconception about curlers? “They like to party.” Your ideal shot to win an Olympic gold medal: “Sand wedge to two feet, miss putt, tap in to win.”