This week’s female Athlete of the Week is Sherry Anderson of Delisle, Saskatchewan. 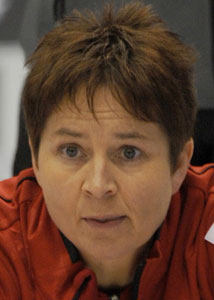 Birthdate: January 6, 1964 Birthplace: Prince Albert, Saskatchewan Hometown: Delisle, Saskatchewan Curling Club: Granite CC in Saskatoon Current Team:Team Lawton Position: Third Delivery: Right Nickname: Sher Getting to know Sherry Anderson If you’re looking for successful, well-liked curlers, you need look no further than Sherry Anderson. Anderson has been one of the most consistent female curlers in the country over the past 15 years, winning a pile of Asham World Curling Tour cashspiels, four Saskatchewan women’s championships and countless friends around the world. Anderson came oh-so-close to a dream season in 2001-02 when she made the finals in both the Canadian Curling Trials in Regina and the Scotties Tournament of Hearts two months later in Brandon, Manitoba. Unfortunately, she lost both games (to Kelley Law in the Trials and Colleen Jones in the Hearts), but earned praise from curlers across the country for the grace and class she showed in defeat. Those traits were a big reason why Anderson was named the winner of the Marj Mitchell Sportsmanship Award at the 2004 Hearts in Red Deer, Alberta. Anderson, who made it to the Road to the Roar Pre-Trials event last year in Prince George, B.C., is taking her curling career in a new direction this season as she joins Stefanie Lawton’s Saskatoon team as a vice-skip, bringing her experience and poise to one of the game’s top up-and-coming teams. Anderson has put in her time behind the scenes as well, officiating at events and serving as a volunteer at the last two Briers in Saskatoon. Quick Hits with Sherry Anderson Do you have any superstitions? “NO!” Three people, living or not, whom you would invite to a dinner party: “Fred Couples, my husband and Barack Obama.” If you could be a star any other sport, what would it be, and why? “Golf. What better place to spend your time than on a beautiful golf course and making money!” If you could change any rule in curling, which one would it be, and why? “I’m not sure there are any rules that need changing.” What music do you like to listen to before a game? “I don’t usually listen to music before the game.” Favourite: — Website? “SaskCurl.com” — Order from Tim Hortons? “Half french vanilla, half coffee.” — Vacation destination? “I love anywhere that is warm when it is cold here.” — Junk food? “Twizzlers (strawberry).” Do you have any pet peeves? “People who signal right, pull over on the shoulder and then turn LEFT!” Three things you always travel with? “Herbal tea, running shoes, toothbrush.” First thing on your Bucket List? “Go on a vacation to China.” Favourite pastime between draws at cashspiels? “Reading and TV surfing.” “One thing most people don’t know about you?” “I was really born Samuel Frank Anderson and had a sex change at the age of 25 (just kidding!)” What is the biggest misconception about curlers? “That we are not real ‘athletes.’ ” Your ideal shot to win an Olympic gold medal: “Guard.”