This week’s female Athlete of the Week is Andrea Kelly of Aroostook, N.B. 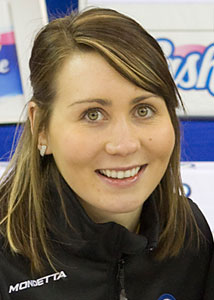 Birthdate: July 31, 1985 Birthplace: Perth-Andover, New Brunswick Hometown: Aroostook, New Brunswick Curling Club: Gage Golf & Curling Club Current Team: Team Kelly Position: Skip Delivery: Right Nickname: Ange Getting to know Andrea Kelly Andrea Kelly has been racking up big wins in New Brunswick for about as long as she can remember. She started way back in 2003 when she took advantage of the rare opportunity to represent her province on home ice at the Canada Winter Games in Bathurst-Campbellton, N.B., claiming a bronze medal. That set the stage for her glittering junior career, which actually started in 2002 when she made her first trip to the junior nationals, in Summerside P.E.I. Two years later in Victoria, Kelly skipped New Brunswick to a bronze medal, and then, finally, in 2005 — again, in her home province, in Fredericton — Kelly was able to capture a long-awaited Canadian junior women’s curling championship. A few weeks later, she curled on the same Pinerolo, Italy, ice surface that would host the 2006 Winter Olympics curling competition, and skipped Team Canada to bronze medal. She was a heavy favourite to win a fourth New Brunswick junior title in 2006, her final year of eligbility, but she lost in the provincial final. Kelly recovered nicely, though; a few weeks after the provincial junior loss, she won her first New Brunswick women’s title — her first of three (she also won in 2009 and last season) — and put together a more-than-respectable 5-6 record at the Scotties Tournament of Hearts in Lethbridge as the youngest skip in the field. Quick Hits with Andrea Kelly Do you have any superstitions? “Not really.” Three people, living or not, whom you would invite to a dinner party. “SID!! (Crosby, that is); Ellen (DeGeneres); Keith Urban.” If you could be a star any other sport, what would it be, and why? “Volleyball — I love the sport, that it can be played on the beach, I love the whole set-up and strategy in it, and that’s my second sport.” If you could change any rule in curling, which one would it be, and why? “Tough question . . . maybe the one that I think is only a WCF rule, that doesn’t allow the skip to sweep behind the tee once they’ve given the house over to their third. This was how it was when we were at world juniors in 2005.” What music do you like to listen to before a game? “Country.” Favourite: ­— Website? “Facebook?! And shopping sites.” — Order from Tim Hortons? “Not often, but everything bagel, toasted with butter; not into coffee, so would substitute for cappuccino.” — Vacation destination? “Never been, but Hawaii someday?” — Junk food? “Gummy candies!” Do you have any pet peeves? “People who go to the gym and don’t break a sweat.” Three things you always travel with? “Cell phone, music . . . (I know, boooring).” First thing on your Bucket List? “I’ve been thinking about this recently; I think I’d like to try sky diving.” Favourite pastime between draws at cashspiels? “I would enjoy playing crib but we never have room or think to pack that stuff. I’d say watching TV and snacking . . . and now there’ll be schoolwork to do!” One thing most people don’t know about you? “I can be shy and find it hard to go out of my comfort zone in groups with unfamiliar people.” What is the biggest misconception about curlers? “Fitness isn’t required, that were not athletes.” Your ideal shot to win an Olympic gold medal: “I know I’m a skip and should say a draw, but I’ll say an open hit.”