This week’s female Athlete of the Week is Shelley Nicols of St. John’s, NL 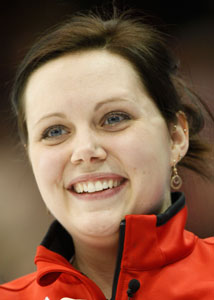 Birthdate: May 19, 1982 Birthplace: Labrador City, NL Hometown: St.John’s, NL Curling Club: Remax Centre Current Team: Team Nichols Position: Skip Delivery: Right Nickname: Mark Nichols’ sister (haha!) or Shel Getting to Know Shelley Nichols As you see by her nickname, Shelley Nichols is often mentioned in the same sentence as her big brother Mark, who threw third rocks for Team Canada’s gold-medal winning team at the 2006 Winter Olympics in Italy. But Shelley has carved out quite a niche of her own on the women’s competitive circuit, winning Newfoundland and Labrador championships at various levels for more than a decade now. Her first significant victory was back in 1999 when she earned the right to represent Canada’s youngest province at the Canada Winter Games, and got to do it in her home province as the Games were staged in Corner Brook. She followed that up with three straight Newfoundland and Labrador provincial junior championships, playing vice-skip for Jennifer Guzzwell, and earned a silver medal at the 2002 Canadian junior championships, losing in Summerside to the hometown favourites, Suzanne Gaudet’s P.E.I. champs. But Gaudet (now Suzanne Birt) evidently liked what she saw in Nichols because she asked her to serve as the Team Canada alternate at the world juniors in Kelowna, B.C., where Canada earned a bronze medal. Nichols, who like her brother can throw the high hard one like few others in the game, has carried that success on to the women’s circuit; she won provincial Tournament of Hearts titles in 2006 and 2007 as Heather Strong’s third and skipped her own team to the Canadian Scotties in Sault Ste. Marie, Ont., last season, finishing with a 4-7 record. And, oh yes, Mark and Shelley combined (Mark at skip, Shelley at third) to win the 2005 Canadian mixed championship. Nichols is successful in summer sports, too; she’s claimed a pair of Eastern Canadian fastpitch softball championships, playing left field. Quick Hits with Shelley Nichols Do you have any superstitions? “I always sleep in the bed closest to the window in hotels while at ’spiels. I’m not sure if that’s a superstition.” Three people, living or not, whom you would invite to a dinner party. “Zach Galifianakis, my Nan Nichols (She’s 88 and super cool!), and Mitch Albom.” If you could be a star any other sport, what would it be, and why? “A gymnast, so I could do back handsprings and other random flippy things without pulling something.” If you could change any rule in curling, which one would it be, and why? “Ten ends to eight, for sure — more intense for the players, more fun for the fans!” What music do you like to listen to before a game? “Usually I’ll listen to any song that is upbeat and that I know all the words. I like to sing, however I am by no means musically talented.” Favourite: — Website? “tsn.ca/curling” — Order from Tim Hortons? “Large double double.” — Vacation destination? “Montego Bay, Jamaica.” — Junk food? “Salt ’n’ Vinegar Lays.” Do you have any pet peeves? “Impatience and bad grammar.” Three things you always travel with? “Credit card, iPhone and ID — you can get anything else you need with those three in your pocket!” First thing on your Bucket List? “Bungee jumping!” Favourite pastime between draws at cashspiels? “I am the biggest napper EVER.  Sleep, sleep, sleep!” One thing most people don’t know about you? “My name is Michelle.” What is the biggest misconception about curlers? “That we’re not actually athletes.” Your ideal shot to win an Olympic gold medal: “Any shot to win an Olympic medal an ideal shot!”