This week’s male Athlete of the Week is Marcel Rocque of Edmonton, Alberta. 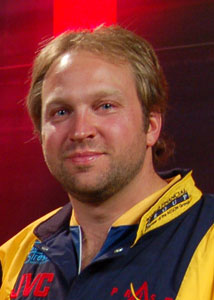 Birthdate: June 22, 1971 Birthplace: St. Paul, Alberta Hometown: Edmonton Curling Club: Crestwood Curling Club Current Team: Freelancing! Position: Lead Delivery: Right Nickname: Marty or Shot Rocque Getting to know Marcel Rocque Was he Huffin’? Or was he Puffin’? Either way, this much is true: Marcel Rocque formed half of one of the greatest men’s front ends in curling history. The burly lead for the Randy Ferbey foursome (rounded out by third and last-rock thrower Dave Nedohin, and second Scott Pfeifer) is blessed with a surgeon’s touch when it comes to placing guards in exactly the right spot, and a body-builder’s muscle when it comes (along with Pfeifer) to sweeping Nedohin’s draw-shots to the pin. That foursome put together an amazing resume that included four Brier championships and three world championship, and countless victories on the World Curling Tour. Rocque and Pfeifer were given those memorable nicknames Huffin’ and Puffin’ by TSN commentators Linda Moore and Ray Turnbull after a particularly strenuous sweeping effort that left both gasping for air when the shot finally came to rest, precisely where it was supposed to. An avid wine connoisseur and cook, Rocque finds himself without a full-time team this season as the Ferbey foursome split up earlier this year, mainly to take a break from the full-time commitment to the sport. But never say never; when it’s playdown time in Alberta, don’t be surprised if you see Rocque back in the hack, playing for another Brier Purple Heart. In the meantime, Rocque is keeping busy helping build the future of the sport. He volunteers his time at numerous camps for curlers of all ages and skill levels, and was one of the featured coaches at a La Releve camp in Edmonton that brought together most of Canada’s elite young curlers. Quick Hits with Marcel Rocque “Do you have any superstitions? “I had so many as a junior player that it got to the point where I couldn’t remember them all so I decided to quit them altogether!” Three people, living or not, whom you would invite to a dinner party. “Dave Nedohin, Randy Ferbey and Scott Pfeifer. We always have fun and many laughs and/or debates.” If you could be a star any other sport, what would it be, and why? “Hockey — better pay!” If you could change any rule in curling, which one would it be, and why? “Not sure.” What music do you like to listen to before a game? “Christmas carols. That would mean that I’m back playing at another world championship and the Scottish fans would be cheering with Christmas jingles!” Favourite: — Website? “www.recipes.com” — Order from Tim Hortons? “Triple cream coffee.” — Vacation destination? “Anywhere that I haven’t seen before.” — Junk food? “Chocolate.” Do you have any pet peeves? “When a curler asks their skip if they hit the broom when they missed the shot that was called. Can’t they see the results? Oh, no, I get it — they’re looking for an excuse for their miss because, surely to God, it’s not the thrower’s fault! LOL!” Three things you always travel with? “Wallet, wallet and wallet.” First thing on your Bucket List? “Shoot an elk this fall. I haven’t hunted elk yet!” Favourite pastime between draws at cashspiels? “Napping and watching westerns on TV.” One thing most people don’t know about you? “I have a green thumb.” What is the biggest misconception about curlers? “That they can all party hard. Very few can do it and perform at a high level!” Your ideal shot to win an Olympic gold medal: “A nose hit in the last end with my first rock because we would be up by seven and that would be the game-winning throw by the lead!”