This week’s male Athlete of the Week is Jeff Stoughton of Winnipeg, Manitoba. 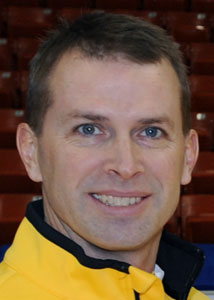 Birthdate: July 26, 1963 Birthplace: Winnipeg Hometown: Winnipeg Curling Club: Charleswood Curling Club Current Team: Team Stoughton Position: Skip Delivery: Right Nickname: Stoughty Getting to Know Jeff Stoughton In a province that has produced more curling legends than any other, Jeff Stoughton may have fought his way to the top of the heap. The elegant toe-slider from Winnipeg has claimed eight Brier Purple Hearts, a Manitoba record that may never be equalled, and along the way has won two Canadian championships — in 1996 at Kamloops, B.C., with an extra-end win over Kevin Martin, and in 1999 at Edmonton, beating Guy Hemmings in the final — to go along with the 1996 world championship he won in Hamilton. Revered by the national curling media for his engaging, frank answers, Stoughton also is a crowd favourite, and can always be counted on at major events to produce one of his patented Stoughton Spinerama deliveries, during which he rotates 360 degrees while throwing his rock — always guaranteed to bring the house down. Stoughton, who also won four Manitoba and two national mixed championships (the latter in 1988 and 1991), also has shown incredible grace under pressure, and under the most difficult of circumstances. He suffered a shattering defeat to Brad Gushue in the final of the 2005 Tim Hortons Canadian Curling Trials at Halifax, but handled that tough loss with class, praising his opponent and his teammates, and answering every tough question in the wake of the toughest loss of his storied career. Stoughton doesn’t go hard on the cashspiel circuit anymore, but he still remains a threat at every event he enters. He had a solid run at the 2009 Tim Hortons Canadian Curling Trials in Edmonton, losing the semifinal to Glenn Howard, and then followed up with a 7-4 record at the Tim Hortons Brier in Halifax. Stoughton is also doing his part to hone the skills of Canada’s next generation of curlers; in addition to helping coach his son’s team in Winnipeg, he also works as a coach and consultant with the Canadian Curling Association’s La Releve program. Quick Hits with Jeff Stoughton Do you have any superstitions? “Of course, don’t we all! I usually end up sitting in the same seat for our ride to the games.” If you could be a star any other sport, what would it be, and why? “Water-skiing; I love the water and the speed.” If you could change any rule in curling, which one would it be, and why? “Well, the teams are getting so good at hitting, so I would change the four-rock rule to a five-rock free guard zone rule. Heck we went from three to four, so why not five?” What music do you like to listen to before a game? “None; I can’t find any replacement/rechargeable batteries for my cd Walkman!” Favourite: — Website? “Nascar.com; I love following all the races and drama involved in stock-car racing.” — Vacation destination? “Caddy Lake.” — Junk food? “Anything with chocolate.” Do you have any pet peeves? “Be on time!” Three things you always travel with? “Visa card — that’s it. If I forget something else, I know I can go buy it when I get there!” First thing on your Bucket List? “I have already done the first thing on my bucket list.” Favourite pastime between draws at cashspiels? “TV or movies.” One thing most people don’t know about you? “I’m not as tall as you think.” What is the biggest misconception about curlers? “That the sport is boring.” Your ideal shot to win an Olympic gold medal: “As a skip, I hope not to even have to throw my last shot! But for the excitement, it would be a draw to, say, full-four to win.”