This week’s female Athlete of the Week is Stephanie Malekoff of Grande Prairie, Alta. 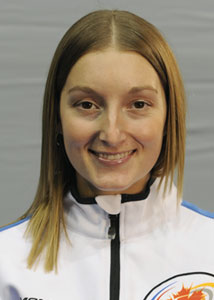 Birthdate: March 31, 1984 Birthplace: Grande Prairie, Alta. Hometown: Grande Prairie, Alta. Curling Club: Grande Prairie Curling Club Current Team: Team Desiree Owen Position: Lead Delivery: Right Nickname: Stephie Getting to Know Stephanie Malekoff For a relatively small town in northwestern Alberta, Grande Prairie produces some world-class curlers, and Stephanie Malekoff is certainly one of them. The smooth-throwing lead for Desiree Owen’s team has been enjoying success at various levels for nearly a decade, and most of it has been with her long-time skip, Owen. As juniors, the two combined to win an Arctic Winter Games gold medal, a Western Canadian juvenile chamoionship and a pair of Alberta junior crowns, claiming a bronze medal at the 2003 Canadian junior championships (losing the semi to eventual world champion Marliese Kasner of Saskatchewan), and then a heartbreaking silver two years later, losing the final to New Brunswick’s Andrea Kelly after a perfect 12-0 run through the round-robin. Not long afterwards, Malekoff and Owen moved on to women’s play, joining forces with skip Crystal Webster, and the new team earned some instant success, reaching the final of the Asham World Curling Tour Grand Slam Autumn Gold cashspiel in Calgary just weeks into their partnership. Over four seasons, that team was one of the best in the country, and they capped off their run by qualifying for the Tim Hortons Roar of the Rings Canadian Curling Trials by claiming the A-event title at the Road to the Roar Pre-Trials qualifier in Prince George, B.C. This season, Owen and Malekoff are staying closer to home, as Owen has returned to skipping duties and her long-time lead doing her normal bang-up job of setting up ends; the team also includes second Cary-Anne Sallows, who played the same position on Owen’s junior teams, along with Kalynn Park. And just like four years ago, the team is showing early promise. Team Owen made it all the way to the final of the Grand Slam Autumn Gold cashspiel over the Thanksgiving weekend before losing to Olympic bronze-medallist Bingyu Wang of China. Quick Hits with Stephanie Malekoff Do you have any superstitions? “No.” Three people, living or not, whom you would invite to a dinner party. “Jesus, St. Teresa and Terry Orlick (author of In the Pursuit of Excellence).” If you could be a star any other sport, what would it be, and why? “Swimming; I love to swim!” If you could change any rule in curling, which one would it be, and why? “I’m not sure.” What music do you like to listen to before a game? “Anything that inspires and motivates me; Skillet, Christian rock, etc.” Favourite: — Website? “www.teamowen.ca” — Order from Tim Hortons? “Large, black coffee please.” — Vacation destination? “Maui, Hawaii (where my husband Mark and I went on our honeymoon) or Jasper/Banff, Alberta.” — Junk food? “Ice Cream (vanilla, coconut and pina colada are my favorite flavours) and homemade oatmeal raisin cookies.” Do you have any pet peeves? “I try not to let things bother me too much.” Three things you always travel with? “Curling shoes, driver’s licence and the Bible; Most other stuff you can buy once you get there.” First thing on your Bucket List? “Learn how to surf.” Favourite pastime between draws at cashspiels? “Napping, for sure.” One thing most people don’t know about you? “I am a Christian.” What is the biggest misconception about curlers? “That they are not fit.” Your ideal shot to win an Olympic gold medal: “Out-turn, draw to the button, sweeping it to the pin.”