This week’s male Athlete of the Week is Steve Laycock of Saskatoon. 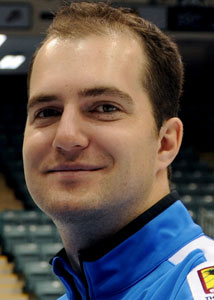 Birthdate: Oct. 29, 1982 Birthplace: Yorkton, Sask. Hometown: Saskatoon Curling Club: Regina Current Team: Team Simmons Position: Third Delivery: Right Getting to know Steve Laycock The season after the Olympics always features change in the world of curling, and Steve Laycock was in the middle of it. The long-time lead for Pat Simmons’ Saskatchewan powerhouse team knew a shakeup for the lineup was inevitable, so as bodies started moving from team to team, he approached Simmons with an idea: the two would stick together, with Laycock moving from lead to vice-skip, and two promising young curlers, Brennen Jones and Dallan Muyres, who won a provincial junior men’s title in 2008, would form the front end. The idea caught on, and the new-look team has enjoyed early success on the Asham World Curling Tour, reaching the playoff round in its first three events, including a semifinal appearance at the star-studded Westcoast Curling Classic in New Westminster, B.C., over the Thanksgiving weekend, losing out to world champion Kevin Koe of Edmonton. Laycock brought a powerful resume with him to the Simmons team when he joined in 2006. Three years earlier, he captured a Canadian and world junior championship, winning the gold medal with an extra-end 5-4 win over Eric Carlsen of Sweden at Flims, Switzerland. Laycock also won the national university championship in 2006 before winning back-to-back Tim Hortons Brier Purple Hearts with the Simmons squad in 2007 and 2008. In his second appearance, he helped Saskatchewan win a bronze medal, and also took top spot in the Ford Hot Shots competition. The last hurrah for the old-look Simmons team saw Laycock participate in the Tim Hortons Roar of the Rings Canadian Curling Trials in Edmonton. Laycock is active in summer sports as well; he’s played on provincial champion slo-pitch teams in 2008 and 2010. Quick Hits with Steve Laycock Do you have any superstitions? “Winning-streak socks.” Three people, living or not, whom you would invite to a dinner party. “Johnny Cash, Steven Wright, Miley Cyrus.” If you could be a star any other sport, what would it be, and why? “Baseball or football, because I loved playing both growing up.” If you could change any rule in curling, which one would it be, and why? “Place one stone in play for each team to start the end to make the shots more interesting for the leads.” What music do you like to listen to before a game? “Something up-tempo and with lyrics so that it engages the mind a bit.” Favourite: — Website? “Wikipedia.” — Order from Tim Hortons? “Iced Cap, and a frosted cinnamon roll.” — Vacation destination? “Anywhere hot with floating chairs.” — Junk food? “Wings.” Do you have any pet peeves? “Lack of effort and easily avoidable mental mistakes.” Three things you always travel with? “Laptop, credit card, ID.” First thing on your Bucket List? “Win a Brier.” Favourite pastime between draws at cashspiels? “Napping is the priority, and then playing cards or anything competitive to pass the time.” One thing most people don’t know about you? “I’ve won provincials playing three different positions.” What is the biggest misconception about curlers? “That we don’t need to be athletic.” Your ideal shot to win an Olympic gold medal: “Tap through a port without backing.”