This week’s female Athlete of the Week is Jill Officer of Winnipeg, Manitoba. 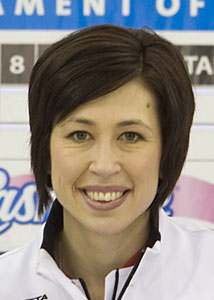 Birthdate: June 2, 1975 Birthplace: Winnipeg Hometown: Winnipeg Curling Club: St. Vital Current Team: Team Jennifer Jones Position: Second Delivery: Right Nickname: Jilly Getting to know Jill Officer She’s the queen of the peel-weight takeout, and one of the best hitters and sweepers in the history of women’s curling, and her skip Jennifer Jones will tell you just how important a contributor her long-time second Jill Officer has been to her teams over the years. The Jones-Officer partnership goes all the way back to juniors; they won the 1994 Canadian junior championship together, and established themselves as two of the up-and-coming players on the tough Manitoba women’s curling scene. Officer honed her game in mixed as well, claiming Manitoba mixed titles in 1996, playing vice-skip for Chad McMullan, and in 2004 as Terry McNamee’s third. A year later, though, Officer and her Winnipeg team — skip Jones, third Cathy Overton-Clapham and lead Cathy Gauthier — burst onto the national scene with a dramatic victory at the Scott Tournament of Hearts in St. John’s, Nfld., an in-off to score four in the 10th end of the championship game — a shot considered by many to be the greatest walk-off winning shot in curling history — and beat Jenn Hanna. Since that victory, Officer has played a significant role in the Jones team being one of the most dominant on the planet. The Winnipeg foursome has claimed hundreds of thousands of dollars in winnings on the Asham World Curling Tour, and has won the past three Scotties Canadian championships, and won the Ford world women’s championship in 2008 at Vernon, B.C., and claimed a bronze medal at the 2010 Ford worlds in Swift Current, Sask. Officer has won three all-star second awards at the Scotties (2010, 2008, 2007), and also has played at the last two Tim Hortons Roar of the Rings Canadian Curling Trials. Officer is active off the ice, spreading the gospel of curling through various speaking engagements around the country.And, oh yes, that just happens to be Jill Officer on the cover of the new 2011 Women of Curling fundraising calendar, which is currently on sale. Quick Hits with Jill Officer Do you have any superstitions? “I probably have more routines than superstitions. If I do have superstitions, I don’t call them that because I don’t like to have them! We are not going to lose a game because I didn’t put my shoes on the same way or open the door with the right hand, but there are definitely things I do that become routine during different events.” Three people, living or not, whom you would invite to a dinner party. “Justin Timberlake, Oprah and Lance Armstrong.” If you could be a star any other sport, what would it be, and why? “Hockey, because it is the other great Canadian sport and we love our hockey players like we love our curlers.” If you could change any rule in curling, which one would it be, and why? “Not sure . . .” What music do you like to listen to before a game? “I don’t generally listen to music before a game, but if I did, anything with a good dance beat; dance, hip-hop stuff.” Favourite: — Website? “Yes, I admit it: Twitter.” — Order from Tim Hortons? “Extra large half hot chocolate, half coffee. Basically a mocha with no whip.” — Vacation destination? “Anywhere new!” — Junk food? “Kraft dinner, ice cream.” Do you have any pet peeves? “When people bang your seat around on an airplane, or grab your seat to get up from behind you; and when people take five minutes to get their bags in the overhead on a plane and there is a lineup of people in the aisle waiting to get by.” Three things you always travel with? “Gravol, massage ball, book.” First thing on your Bucket List? “There’s so many, they’re all important! See the polar bears in Churchill.” Favourite pastime between draws at cashspiels? “Napping, eating.” One thing most people don’t know about you? “I love fishing and will tie my own jigs, bait my own hooks, take my fish off the hook and will (humanely!) kill it before I fillet it. It was how I was taught when I was young.” What is the biggest misconception about curlers? “One of the biggest misconceptions about curlers is that the way you see us on TV and on the ice during a game is actually what we are like away from the game.” Your ideal shot to win an Olympic gold medal: “I would be less nervous on a hit because I would just sweep when I’m told, but a draw to the four-foot would be a great team way to win.”