Between the Sheets: Sometimes Life Gets in the Way!

I get asked often. Where did you come from? And they are not asking, where I was born either. But more, how had I, at 44 represented Canada at the 2010 Olympics when I had previously had so little international experience and no major titles to my name. The simple answers? Maybe it wasn’t my time yet. Or, I hadn’t found the right fit for a team. 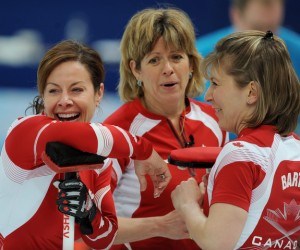 However, I have given it a lot of thought over the last eight months, and all those reason did come to mind – but the truth is, I think during these last four years, we were all at a time in our lives where we could commit to working very hard with the least amount of personal distractions. (The only one that didn’t have the luxury of “no distractions” was Carolyn – who I admire incredibly for her ability to pursue her dreams an continue to be an amazing mother. She is a rarity). Not to say any of us shut down our lives outside of curling, we all continued to juggle work, relationships and family – but we did have the luxury of being able to focus intently on our dream – and that was because of a lot of support and belief at home. For a lot of women, that window of opportunity in life, where there are minimal distractions, when they can “give it all” is very short. Careers, children, marriages and aging parents all take their toll on time. That is just a fact of life and my reason for writing about this, is not to complain – but to point out that even with these dealings in life, it is still possible to have a dream, go to an Olympics or win a Canadian Championship at some point in your curling career, even if it hasn’t happened by the time you are 30! 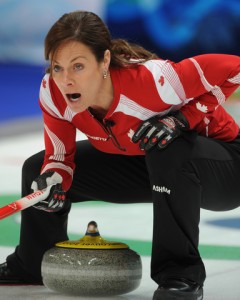 Some do it early – they postpone life, school and careers for the opportunity – some postpone families – we all make sacrifices. But if you are currently in one of the above situations – the chance is not lost, you can stay in the game. Stay in shape, stay mentally sharp and it is a real possibility at some point that will get the chance. That is what is so great about this game- your curling dreams, Canadians or Olympics, whatever doesn’t have to be shoved into the back of the closet down in the basement after you turn 30 or even 40! I was 23 when I decided to start my insurance agency in Calgary- that pretty much killed my social life and my curling for the first five years. I was working 7 days a week and long hours to build the business. I was committed to it and it was something I loved doing. Not to say I didn’t curl – I still entered play downs – we won and Alberta Women’s provincial title in 1992 and a mixed Alberta title in 1993. Did we work hard for those titles? Not like we do now – not like we did these past four years. But I kept at it, and five years into starting the business we won another Alberta provincial Women’s title and a trip to the Scott Tournament of Hearts in Thunder Bay. I figured I had it all going fairly well at the Canadians. I had never taken 10 days away before, and all seemed to be running smoothly back at the office and we were winning in Thunder Bay. About the halfway point of the Canadians I received an unusual call from the accounting firm that was doing our company year end. They had a lot of funny questions about some questionable with drawls and duplicate cheques Long story short, a long time employee had been embezzling funds for the past year. I was devastated to say the least. So, I finished up the Canadians (we lost the final to Marilyn Bodogh that year) and came back to Calgary and made the obvious decision that I couldn’t give both curling and my career the time and attention necessary and dove back into the workplace. Four years past and I still played the game – but my business was first and foremost before anything else. I do remember wondering after the 1996 lost to Marilyn (knowing work was my top priority) if I would ever get back to a Canadians again? Had I missed my window of opportunity? Time flew by, and I still played. We won the odd spiel and lost the Alberta Provincial final in 2000. I then made the decision in 2001 to sell my general insurance agency (after 12 years) and take some time – see where I wanted to go next and maybe really give this game another shot. However, life always throws you a curve and 5 months after I sold, my father was diagnosed with a stage 4 brain tumor. I spent the next 2 years taking care of my father, trying to find a cure, researching alternative treatments and putting out the fires that inevitably come when someone is dealing with a terminal cancer. To this day I am so glad that things worked out the way they did – I would have never had the time to commit to my father had I still owned my business – so as they say. Things happen for a reason. Now backing up a bit – knowing I was selling in 2001, I put together a team that I was excited about. Susan O’Connor, Barb Davies and my long time teammate, Karen Ruus. I was pretty excited and looking forward to really committing to the game again. It was halfway through our first season that my dad was diagnosed with terminal cancer –and my team was amazing…for the next 2 years they put up with me not mentally being “in the game” or emotionally or physically…and I don’t remember one word of complaint from anyone. Susan, Karen and I stayed together (with a variety of 2nds) until 2005 when Karen retired from the competitive game. That was when the 2010 Olympic front end was added – and when life finally said to me. “It’s your time, if you are ready! In 2007, 11 years after my last win to go to the Scotties in Thunder Bay we won the Alberta Provincial Women’s title again. I never thought it would have taken 11 years. Now the rest is history but the point is this. For a variety of reasons – my run to win a Canadian or Olympic Trials had been put on hold for close to 12 years – trust me I don’t regret any of that, not one minute. During that time I had built and sold a successful business and most importantly was gift of time to spend with my Dad before he passed away. I had always wondered if I had missed my window, my chance in this game. And this is what is important to realize – this game doesn’t limit your potential with age. The only way you limit yourself, is with your own beliefs of what is possible. So if you are in that period of your life, right now, where family or career are at the top of your list of priorities, don’t stop believing. It can happen. Stay in the game and continue to dream! “To achieve in sports you first have to have a dream and then you must act on that dream. The best athletes are those who truly enjoy what they are doing and display a tremendous amount of work ethic. They continue to preserver in spite of setback and never lose sight of their ultimate goal” Author Unknown