This week’s male Athlete of the Week is Blake MacDonald of St. Albert, Alberta. 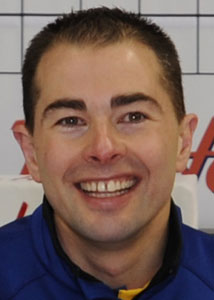 Birthdate: April 10, 1976 Birthplace: Cold Lake, Alta. Hometown: St. Albert, Alta. Curling Club: Saville Centre Current Team: Team Koe Position: Third Delivery: Right Nickname: B-Mac Getting to know Blake MacDonald It took years of knocking on the door before Blake MacDonald could finally walk through it, and last season, he did it in style. MacDonald claimed his first Brier Purple Heart back in 1999, curling with Ken Hunka, then spent the next decade trying in vain to get back to curling’s grandest stage. He lost a bunch of provincial championship finals, many in heartbreaking fashion, but last season, throwing third rocks for Kevin Koe’s Edmonton team, all of the frustration melted away over a two-month span. First came a long-awaited victory at the Boston Pizza Cup Alberta men’s championship in Olds, combining with Koe, second Carter Rycroft and lead Nolan Thiessen to beat Randy Ferbey in the final. Then, at the Tim Hortons Brier in Halifax, MacDonald had a solid week leading up to the playoffs, then curled a brilliant 91 per cent in the final as Alberta beat Ontario’s Glenn Howard in an extra end on Koe’s last-rock draw to the lid. The dream season was capped with a victory over Norway’s Torger Nergård in the final of the world men’s championship in Cortina D’Ampezzo, Italy. MacDonald’s first appearance on the national scene came in 1995 when he played at the Canadian junior championship; two years later, he competed at the 1997 Olympic Trials in Brandon, Man. And last season, he played in his hometown at the Tim Hortons Roar of the Rings Canadian Curling Trials at Rexall Place. MacDonald is an active participant in the Edmonton area in various junior curling camps, and is an avid golfer, too, having won a gold medal at the 1992 Alberta Summer Games on the links. Among his highlights: a marriage to “famous curler and royal babe” Lawnie MacDonald, who this year is playing with Renee Sonnenberg. Quick Hits with Blake MacDonald “Do you have any superstitions?” More than you could ever imagine: if things are going bad, it’s because you clearly haven’t aligned your karma correctly. It’s amazing how changing the littlest things can cause your mindset to produce the most profound outcomes.” Three people, living or not, whom you would invite to a dinner party. “David Fehety, Robin Williams and Justin Halpern’s Dad (Sh*t my Dad Says).” If you could be a star any other sport, what would it be, and why? “Volleyball — probably the funnest and coolest sport I’ve ever played reasonably well.” If you could change any rule in curling, which one would it be, and why? “The rule that says you have to wear a mike if you’re on TV; seriously, if you did this in hockey or any other televised sport, your four-year-old would start saying things that make me look like a pastor.” What music do you like to listen to before a game? “Whatever Kevin Koe finds on the radio; usually Britney Spears.” Favourite: — Website? “www.wikipedia.com.” — Order from Tim Hortons? “Large double-double.” — Vacation destination? “Europe.” — Junk food? “My own homemade apple crisp.” Do you have any pet peeves? “Uptight, intolerant people.” Three things you always travel with? “Laptop, BlackBerry, iPod.” First thing on your Bucket List? “Golf St. Andrews . . . oh, wait, I did. Win a world championship . . . oh, wait, I did. Sell my company and retire . . . oh, wait, I did. Well . . . I guess I might as well go for world peace.” Favourite pastime between draws at cashspiels? “Drinking beer.” One thing most people don’t know about you? “Carter (Rycroft) and I watch the History Channel almost every chance we get when we’re on the road.” What is the biggest misconception about curlers? “That we’re drunk all the time . . . I mean, some of those other teams hardly drink at all.” Your ideal shot to win an Olympic gold medal: “Out-turn, hack-weight hit, on the centre line, with no guards and rocks pocketed all around it so it’s 100 per cent impossible to miss.”