This week’s female Athlete of the Week is Sasha Carter of Kelowna, British Columbia. 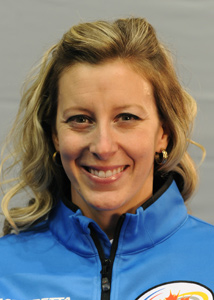 Birthdate: July 20, 1974 Birthplace: Ashern, Man. Hometown: Kelowna, B.C. Curling Club: Kelowna Curling Club Current Team: Team Scott Position: Second Delivery: Right Nickname: Sash Getting to know Sasha Carter There’s something about wearing a Maple Leaf on her back in an event outside of Canada that seems to bring out the best in Sasha Carter. The Manitoba-raised Carter, who’s been a long-time fixture at second for Kelly Scott’s Kelowna, B.C., quartet, got her first chance back in 1995 as the second for Scott’s Canadian junior championship team from Winnipeg. A year earlier, that team had lost the Manitoba junior final, but in ’95, Carter helped her team win not only the provincial title, but the national junior championship, and followed that up by winning the gold medal at the world juniors in Perth, Scotland. Fast forward to 2007: the Scott team, now rounded out by third Jeanna Schraeder and lead Renee Simons, had won its second straight title at the Scotties Tournament of Hearts in Lethbridge, Alta., and headed to Aomori, Japan, hoping for an improvement on its bronze-medal showing at the Ford world women’s championship a year earlier in Grande Prairie, Alta. This time, Carter and Co. made no mistake. The Canadian champs lost just once in the round-robin, then went on to beat Denmark’s Angelina Jensen 8-4 in the gold-medal game in the first world women’s championship ever staged in Asia. Carter has been one of the women’s game’s most consistent seconds over the past few seasons; she’s been a second-team all-star at the Scotties four times over the past five years, and has one of the most upbeat personalities you’ll find in the game. Off the ice, Carter helps build the sport by volunteering her time with, among other organizations, the B.C. Special Olympics. As well, she manages the difficult act of juggling her curling career with family, in addition to broaden her horizons in sports. She’s competed in a half-dozen or so half-marathons, and has a long-term goal of completing a full marathon in the future. Quick Hits with Sasha Carter Do you have any superstitions? “No, not really.” Three people, living or not, whom you would invite to a dinner party. “Elvis from his ’68 comeback special (DREAMY!!), my homeboy JT (Justin Timberlake) so we could cut a rug together, and Ellen DeGeneres — to keep the laughter rolling.” If you could be a star any other sport, what would it be, and why? “Volleyball. Loved playing it in high school and university recreation; the speed, the power, the grit and competitive nature. When you get angry, you just get to be more aggressive. It’s fantastic!” If you could change any rule in curling, which one would it be, and why? “At major championships, allow the curlers to put their water-bottles out near the hoglines; sorry, TV, but helloooo people — we’re athletes who need to rehydrate! (I know it’s not really a curling rule, but it’s a pet peeve of mine!)” What music do you like to listen to before a game? “Something with a lot of drums and loud guitar. I’m a child of the ’80s and ’90s rock era. Bring on AC/DC, Aerosmith, Metallica.” Favourite: — Order from Tim Hortons? “Large coffee, one milk, one cream, one sweetener.” — Vacation destination? “My own backyard pool oasis in the summer, or my mom’s cottage.” — Junk food? “LOVE Taco-flavoured Old Dutch chips, with some chocolate almonds on the side.” Do you have any pet peeves? “Incompetency drives me nuts!!” Three things you always travel with? “Toothbrush, change of underclothes, cell phone.” First thing on your Bucket List? “Sky diving! I’ve done the bungee thing and the parasailing thing; now on to the real fun!” Favourite pastime between draws at cashspiels? “Shopping, eating and napping; somehow, we fit curling in there, too.” One thing most people don’t know about you? “I was raised in a small town in Manitoba (population less than 1,500), and on July 1, 2010, the town unveiled a huge two-sided mural saying, “The home of Sasha Carter”, complete with action shots!” What is the biggest misconception about curlers? “That other countries will never catch up to Canada’s talent. They are and they will, unless change is implemented.” Your ideal shot to win an Olympic gold medal: “Outturn peel down centre.”