This week’s female Athlete of the Week is Michelle Englot of Regina, Saskatchewan. 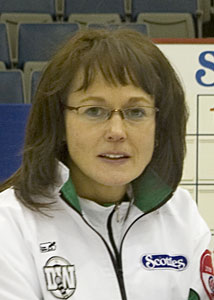 Birthdate: Jan. 22, 1964 Birthplace: Montmartre, Sask. Hometown: Regina Curling Club: Tartan Curling Club Current Team: Team Englot Position: Skip Delivery: Right Getting to know Michelle Englot When there’s a Saskatchewan women’s curling championship on the line, there’s a very good chance you’ll find Regina’s Michelle Englot in the hunt. No skip has won more Saskatchewan titles, and she certainly as earned her spot as one of the most accomplished curlers in that province’s rich granite history. Englot took her first step into the national spotlight in 1983 when she won the Saksatchewan women’s championship, and also played at the Canada Winter Games in Saguenay-Lac St-Jean, Quebec. Four years later, she made her debut at the Scotties Tournament of Hearts in Lethbridge, as an alternate on a Kathy Fahlman team that included future Olympic gold-medallists Sandra Schmirler and Jan Betker. And year later, she got there on her own, beginning a stretch of three straight Saskatchewan titles, and four in five years, that would see her play in two Hearts semifinals, losing both to Heather Houston. After her 1992 appearance, it took Englot nine years to get back, hardly surprising considering the depth of women’s curling talent in Saskatchewan. And she made an emotional return to the Scotties in 2008 in her hometown of Regina, playing with a heavy heart due to the passing her father, just days before the opening of the event. Englot, who also won a provincial mixed crown curling with Randy Gilewich in 2004, also has chased the Olympic dream. She played in the 2001 Trials in Regina, and played in the Tim Hortons Road to the Roar pre-Trials qualifying tournament last year in Prince George, B.C. Englot, a proud mother of “two incredible young men,” works for curling behind the scenes, too. She’s part of the host committee for the 2011 Ford world men’s curling championship later this season in Regina, and also is on the board of directors of the Regina Super Curling League. Quick Hits with Michelle Englot Do you have any superstitions? “Nothing in particular.” Three people, living or not, whom you would invite to a dinner party. “George Clooney (sexiest man on the planet); Usain Bolt (fastest man on the planet); and Warren Sapp (fell in love with his giggle when he was on Dancing With the Stars). If you could be a star any other sport, what would it be, and why? “Beach volleyball. They are incredible athletes and get to play on a beach! Better than freezing your butt off in a curling rink.” If you could change any rule in curling, which one would it be, and why? “Nothing; rules are made to be broken (ha, ha!).” What music do you like to listen to before a game? “Rap/hip hop; Eminem, DJ Khaled, etc.” Favourite: — Website? “fpinfomart.ca (news archive website).” — Order from Tim Hortons? “Extra large black.” — Vacation destination? “Hawaii.” — Junk food? “I have a chocolate weakness!” Do you have any pet peeves? “Indecision — just make a freakin’ decision already.” Three things you always travel with? “BlackBerry, iPod and a good book.” First thing on your Bucket List? “Seeing an NBA game.” Favourite pastime between draws at cashspiels? “Dice or shopping as we aren’t allowed to nap.” One thing most people don’t know about you? “I was the biggest tomboy ever growing up. Grew up on a farm, milking cows, shooting guns and driving dirt bikes.” What is the biggest misconception about curlers? “That we are out-of-shape beer drinkers.” Your ideal shot to win an Olympic gold medal: “Would have to be a draw shot. The ultimate team shot.”