This week’s Male Athlete of the Week is E.J. Harnden of Sault Ste. Marie, Ontario. 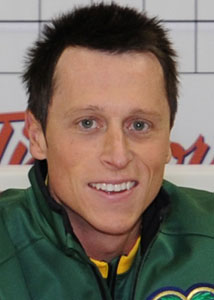 Birthdate: April 14, 1983 Birthplace: Sault Ste. Marie, Ontario Hometown: Sault Ste. Marie, Ontario Curling Club: Soo Curlers Association Current Team: Team Jacobs Position: Third Delivery: Right Nickname: Edge Getting to know E.J. Harnden It can be a burden wearing the colours of Northern Ontario at the Tim Hortons Brier, because you step on the ice with a target on your back, and the people taking the shots are those who wonder if the region should still have its own team at the Canadian men’s curling championship. But E.J. Harnden, the vice-skip for Brad Jacobs’ Sault Ste. Marie foursome, silenced plenty of naysayers during the 2010 Brier at the Metro Centre in Halifax. En route to making the second all-star team at third, Harnden curled a splendid 85 per cent during the round robin as the Jacobs team (rounded out by second Ryan Harnden, who’s E.J.’s brother, and lead Caleb Flaxey) rattled off eight straight round-robin victories to finish second heading into the playoffs — the first time a Northern Ontario team had gone beyond the round-robin since 1993. There, the relative lack of experience caught up with the team as it lost the Page one-two game, followed by the semifinal, but the bronze medal was proof positive that Northern Ontario teams can still be very competitive. It was E.J. Harnden’s second trip to curling’s biggest show; he also competed in the 2008 Brier in Winnipeg, playing third for his dad Eric. Off the ice, Harnden has been equally successful academically; he posted the highest overall average in his university graduating class after finishing off his degree in marketing specialization (and, yes, he points out, “there was more than just myself” in the class!) Quick Hits with E.J. Harnden Do you have any superstitions? “We always sit in the same seat in the vehicle on our way to the club until we lose.” Three people, living or not, whom you would invite to a dinner party. “GSP (Georges St-Pierre) — I respect his dedication and drive to be the greatest at what he does. Jessica Alba and Scarlett Johansson or Jessica Alba, Scarlett Johansson and Brad Jacobs (just so this way I would definitely look good and have a chance).” If you could be a star in any other sport, what would it be, and why? “Hockey — I played on travelling teams up until the age of 16 and then my dad made me choose between continuing with hockey or curling.” What music do you like to listen to before a game? “I have gotten away from listening to music before the game. The last thing I need is to get more amped up then I already am. I think my teammates and our brooms have benefitted from this a great deal. Now I just use mental focus and try to shut everything else around me off and focus on the task at hand.” Favourite: — Website? “TSN.ca.” — Order from Tim Hortons? Extra-large double double and bagel.” — Vacation destination? “Nothing beats Vegas.” — Junk food? “McDonald’s; always my go-to junk meal (when I have one) on my days off from the gym.” “Do you have any pet peeves? “I have lots. Many have to do with people who are terrible drivers; like when someone stays in the left lane on the highway (four lanes, we have two lanes in the north) and you have to pass them on the right, or even worse when two cars drive side by side and you are stuck behind them. We drive to lots of our events, so usually when something like this happens you will typically see Brad or myself pass them both (room permitting); I don’t recommend to try this too often. I will answer for Brad Jacobs as well since I know his answer will be “dumb questions,” so I make sure to ask as many dumb questions as possible each and every day we are away. I also change his settings on his BlackBerry every chance I get so he will probably say that as well.” Three things you always travel with? “BlackBerry, gym clothes, laptop.” First thing on your Bucket List? “Curling-wise, win the Brier; other than that, it would be to travel the world without a schedule and just go.” Favourite pastime between draws at cashspiels? “I will answer again for Brad Jacobs first. Napping would be an understatement; he literally has short sleeps. His day consists of waking up, going and playing our game, getting back into bed and repeat. I usually just like to watch some TV relax and ask Brad dumb questions while he tries to fall asleep.” One thing most people don’t know about you? “I am actually pretty shy. Shocker to most, but the truth.” What is the biggest misconception about curlers? “They are not athletes or curl because they can’t play any other sports. I have played many different sports at a competitive level and to me curling is the most difficult overall.” Your ideal shot to win an Olympic gold medal: “Since I am a third, it would have to be making a big raise-back double or some sort of high-weight shot that changed the makeup of the end. I would also love to see Brad make a wide open nose hit for the win, though; that would be ideal.”