The first official Canadian schoolboys curling championship took place back in 1950 and for the next 25 years the age limit was 18 and Canada’s high schools played a major role in its operation. But it would seem that all good things come to end. And so it was that the connection between junior men’s curling and the education system ended after the 1975 season. I still find myself correcting people who blame the Canadian Curling Association for “taking curling away from the schools.” It wasn’t the CCA. Frankly, it had nothing to do with the CCA or any of its member associations. 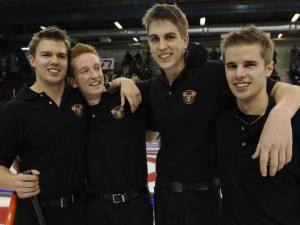 You see, back in those days, a national organization — known as the High School Athletic Federation — was responsible for overseeing the operation of sports within Canada’s high schools. It was the federation, in fact, that decided that schools shouldn’t be involved in any sporting activity that would lead the winners to participate in a national championship. It was thought it was counter-productive to take students out of school for more than a week. And because the national championship was a school-endorsed activity, a teacher had to accompany each team. As a result, the teacher was also lost to the system for a week. So when the last stone came to rest at the 1975 schoolboys championship at the Derrick Golf and Winter Club in Edmonton and Alberta’s Paul Gowsell hoisted the champion’s trophy, the Canadian Curling Association’s affiliation with the Canadian high-school system ended. Looking back at some of the minutes of meetings of the day, it’s apparent the change from schoolboy to junior status did not happen without differences of opinion: By a vote of 36-15, the maximum age of competitors at the new “junior men’s curling” was raised from 18 to 19 years and, in order to compete, all four players had to attend the same school or be members of the same curling club affiliated with the CCA. Before the change, all four curlers on a provincial team had to attend the same school. Junior women’s curling joined the fray in 1971 and, as world junior curling became more competitive in the 1980s, it became obvious to Canada’s rule-makers they were sending 19-year-old national teams to the world junior championships to compete against 21-year-old juniors from the rest of the world on what was a less-than-level playing field. So, in 2000, the Canadian junior age was raised to 20, which is where it sits today. Canada is facing problems today with recruiting new curlers at all levels, and juniors is no exception. Things have changed a lot since 1975, when most curlers didn’t take to a sheet of ice before age 12 or 13. Today’s youngsters are given the opportunity much earlier. Is there a hitch in the current system? An exceptional junior who may be “doing it all” by the age of 14 or 15 probably won’t have an opportunity to compete at a high-performance level before the age of 18 or 19. Some argue that many of these prospects get tired of the wait and simply turn to other sports where excellence at any age allows athletes to engage in top competition. Many do not agree, but I believe several changes need to be made. First, raise Canada’s current junior age limit to 21. This would afford exceptional young players another year to hone their skills before leaping to men’s and women’s curling. And maybe discussions should take place with the World Curling Federation to see if there is an interest in raising the world age to 22. Hand in hand with that, create a new level of competition in Canada that might be called juvenile curling. Juvenile curling could have a maximum age of 16, 17 or 18; that would be determined after consulting with all of the stakeholders. If a national juvenile championship were created, there’s no question it could result in a rebirth of involvement for those 12 to 16 years old. Can you imagine if there were no national hockey competitions for Canadians under the age of 18?