The Tim Hortons Brier, presented by Monsanto, gets underway Saturday, March 5 at the John Labatt Centre in London, Ontario, with one of its best fields ever. 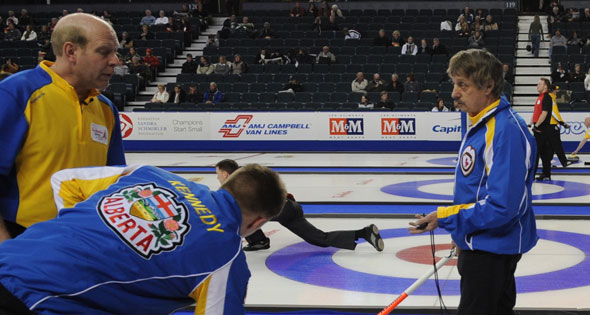 Heading the list is the reigning Olympic gold medallist, Alberta’s Kevin Martin of Edmonton, who is seeking a record fifth Brier win as a skip. Currently, Martin, Randy Ferbey and Ernie Richardson are the only four-time Brier winners as skips. Ferbey has won a record six Briers, but two were as third for Pat Ryan in 1988-89. This marks just the second time that London has staged the Brier. It was last held here in 1974 at the London Gardens, when won by Alberta’s Hec Gervais. It’s also the seventh Brier sponsored by Tim Hortons, the largest quick-service restaurant chain in Canada. TSN will provide exclusive coverage of the Tim Hortons Brier, televising all morning, afternoon and evening round robin draws, plus the playoffs. The final is Sunday, March 13 at 7:30 pm ET. It’s the ninth consecutive year that the Brier final has been contested in Eastern prime time, starting in 2003 in Halifax. Martin, who won Briers in 1991, 1997, 2008 and 2009, will also put his record 26-game Brier undefeated streak on the line. His team went an unheard-of 13-0 in 2008 in Winnipeg and 13-0 in 2009 in Calgary, while winning the Canadian men’s curling championship. He also claimed his first world title in 2008, capturing the world men’s in Grand Forks, North Dakota. The 44-year-old Martin, who will be making his 11th Brier appearance, won the gold medal at the 2010 Olympic Winter Games in Vancouver, defeating Norway’s Thomas Ulsrud in the final. The Martin team of third John Morris, second Marc Kennedy and lead Ben Hebert also went unbeaten in Vancouver, a perfect 11-0. Alberta has won 25 Briers, second only to Manitoba’s 26, since it began in 1927 in Toronto. Glenn Howard of Coldwater, Ontario, the 2007 Canadian and world champion, will be making his 13th Brier appearance, just one behind the record of 14 held by brother Russ Howard. The 48-year-old skip is a three-time Canadian and world champion, having also played third for Russ Howard when winning in 1987 and 1993. At last year’s Brier in Halifax, his team lost the final to Alberta’s Kevin Koe, 6-5 in an extra end, their only defeat of the week. 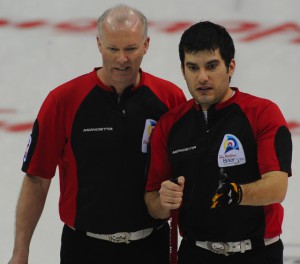 Howard and teammates Richard Hart, Brent Laing and Craig Savill will also be making a Brier record sixth consecutive appearance. Ontario has nine Brier wins, the last by Howard in 2007 in Hamilton. Two-time (1996, 1999) Brier winner and 1996 world champion Jeff Stoughton of Winnipeg will once again represent Manitoba. The 47-year-old Stoughton provided his province with its last victory in 1999 and will be making his ninth Brier appearance. Newfoundland/Labrador’s Brad Gushue of St. John’s, who won Olympic gold in 2006 in Turin, Italy, along with third Mark Nichols, will be making his eighth Brier appearance, yet still seeking his first win. The 2001 world junior champion was the runner-up in 2007 in Hamilton, losing the final to Glenn Howard. The 30-year-old skip will be trying to win just a second Brier title for his province since Jack MacDuff pulled off a shocker in 1976 in Regina. This year’s youngest skip, Northern Ontario’s 25-year-old Brad Jacobs of Sault Ste. Marie, also returns to the Brier, after finishing a surprising third last year in Halifax. Completing the field are British Columbia’s Jim Cotter of Vernon, New Brunswick’s James Grattan of Oromocto, Northwest Territories/Yukon’s Jamie Koe of Yellowknife, Nova Scotia’s Shawn Adams of Halifax, the 2005 Brier runner-up and 1993 Canadian junior champion, Prince Edward Island’s Eddie MacKenzie of Charlottetown, Quebec’s François Gagné of Montreal, making his Brier debut, and Saskatchewan’s Steve Laycock, the 2003 Canadian and world junior champion who is skipping at the Brier for the first time after playing lead for Pat Simmons in 2007 and 2008. The Brier attendance record is 281,985, set by Edmonton in 2005 at the first Tim Hortons Brier, which eclipsed the former mark of 248,793 established in 2000 in Saskatoon. When the Brier was in London in 1974, the attendance was 48,170. When the city hosted the 2006 Scotties Tournament of Hearts, the total attendance was 105,065. The Brier competition involves 10 provinces plus teams representing Northern Ontario and Yukon/Northwest Territories playing a round robin, leading to the Page Playoff system involving the top four teams. The first and second place teams meet in the Page 1 vs 2 game, with the winner advancing to the final while the loser goes to the semi-final. The third and fourth place teams meet in the Page 3 vs 4 game, with the winner also advancing to the semi-final. New this year is the introduction of a bronze medal game on Sunday afternoon, featuring the semi-final loser against the loser of the Page 3 vs 4 game. Since 1980, when the first Labatt Brier was held in Calgary and a playoff format was introduced, 20 of 31 Brier winners have also won the world championship. The latest was Kevin Koe, who captured the 2010 Tim Hortons Brier in Halifax and the Capital One World Men’s in Cortina d’Ampezzo, Italy. The winner of this year’s Tim Hortons Brier, the 82nd edition of the Canadian men’s curling championship, will represent Canada at the Ford World Men’s in Regina, Saskatchewan, April 2-10. The winner also receives a berth into the 2011 Canada Cup in Cranbrook, B.C. and the 2012 World Financial Group Continental Cup in Langley, B.C. Once again this year, $130,000, representing ‘cresting television exposure value’, will be distributed to the four Page Playoff teams: $40,000 each to the winner and runner-up, $30,000 to third and $20,000 to fourth. The always-popular Ford Hot Shots, the pre-event curling skills competition, gets underway Friday, March 4 with the preliminary round from 1:00 pm – 4:00 pm. The playoffs take place Saturday at 12:30 pm, following the Opening Ceremonies, which start at 11:15 am. Ford of Canada will provide the winner of the Ford Hot Shots with a two-year lease on a 2011 Ford Edge SEL FWD, an approximate retail value of $22,000. The second place finisher earns $2,000 while the third place finisher receives $1,000. The first draw of the 2011 Tim Hortons Brier begins at 2:30 pm ET on Saturday, March 5. Up-to-the-minute draw results will be available on the Canadian Curling Association website (www.curling.ca).