Teams have arrived and are ready to roll at the 2011 Canadian Wheelchair Curling Championship. This year’s event is being held at the Jasper Place Curling Club, in Edmonton, AB and will run from March 21-27. 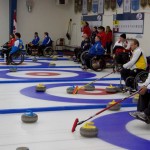 Teams are representing  British Columbia, Alberta, Saskatchewan, Manitoba, Northern Ontario, Ontario, Quebec, Nova Scotia and Newfoundland. A host team from Alberta will round out the field. 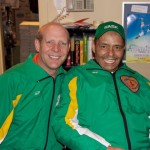 After their first practice, the curlers enjoyed a surprise visit by Kevin Martin. He chatted to all the curlers, and was more than happy to sign autographs and pose for photos! Following the opening ceremonies, teams took the ice for the first draw of the event.

Handshakes came early as Alberta defeated Newfoundland in 6 ends by a score of 11-1. Three other games ended in the 7th end as the Alberta Host Team scored their first win over Ontario 7-5, Manitoba defeated Northern Ontario 9-5 and Nova Scotia narrowly beat out Quebec 6-5.

The last teams on the ice went to an extra end, with British Columbia taking 2 to defeat Saskatchewan 6-4.