World Mixed Doubles – How Does it Work?

This week the World Curling Federation and the USCA are hosting the fourth World Mixed Doubles Championship in St. Paul, Minnesota in conjunction with the World Senior Championships. 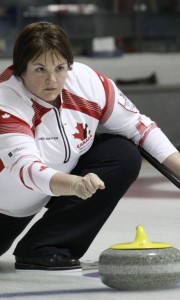 Instead of playing in teams of four, mixed doubles curling is for teams of two players, one male and one female (no alternate/spare player is allowed). Teams have only six stones each (instead of eight) and one of those stones, from each team, is prepositioned on the centre line before each end of play starts (either behind the t-line or a centre guard). Player one delivers the first and last stones and player two plays the second, third and fourth stones. If they choose to, the two players may swap positions from one end to the next. Both team members can sweep at any time and all games are eight ends. You cannot remove a rock from play until after three stones have been delivered (kind of like a five rock rule) so there are lots of rocks in play and it is typical to see big ends scored. If you blank and end you lose the hammer so if you want to play this format, you better enjoy having lots of rocks around! Altogether 24 nations are participating in the World Mixed Doubles event: Australia, Austria, Canada, China, Czech Republic, Denmark, England, Estonia, Finland, France, Hungary, Italy, Japan, Korea, Latvia, New Zealand, Norway, Russia, Scotland, Slovakia, Spain, Sweden, Switzerland, and hosts USA. For this Championship, the 24 Mixed Doubles teams have been divided into three groups. Each group will play a round robin before quarterfinals on Friday, April 22 and semi-finals and medal games on Saturday, April 23. 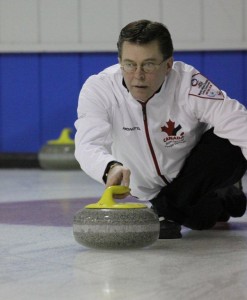 Robert Campbell, Team Canada after an 8-6 win against Denmark: “I love the format – it’s different for us being from Canada where we are used to playing four on four mixed. We had to put a lot of practice into it and hopefully things will pay off this week. It’s a fun, fun game and hopefully we’ll just play better and better as the week goes on. It’s a game where you need patience and you need to really interact with your teammate, you have to know each other really well.” Rebecca Jean MacDonald, Team Canada, after their game against England, which they won 7-6: “We didn’t play very well the first few ends. We didn’t get our stones set up. But then in the latter part of the game we made a few more shots. Each end is just a new game and that‘s how you have to play it. This is our first time ever playing mixed doubles. This is the real thing. I am really enjoying it and I think it’s got potential to go somewhere. You just need to get into the method and the format but it’s a lot of fun out there.” Check out the event at https://www.2011worldcurling.com/ and cheer on Team Canada! Helen Radford Coach, Team Canada