The Excitement is Building in Lethbridge!

An energized promotions team has been out in the community spreading the word on the upcoming 2012 Ford World Women’s Curling Championship. 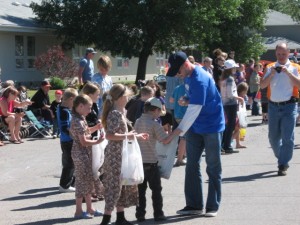 And the people of Lethbridge are catching the spirit for what promises to be the most prestigious sporting event in local history. The team has distributed 10,000 brochures to businesses in a city-wide blitz to ensure all customers have access to the latest information on the world championship. Volunteers joined media partners Country 95 and B-93 to march in the Coaldale Candy Parade, Saturday, July 9 – part of the Coaldale Settler Days – armed with promotional materials for spectators along the parade route. They were right back on the job the next day, meeting with classic car enthusiasts at the 33rd Annual Street Machine Weekend Show ‘N Shine held at Galt Gardens. And they’ll be taking advantage of every opportunity to build on the growing enthusiasm in coming months with appearances at all kinds of events, including Lethbridge’s biggest community festival – Whoop-Up Days, in August. Great seats are still available for the 2012 Ford World Women’s Curling Championship – click here to order your tickets now!