A Big Time “Steele” for the Canada Cup Team

The 2011 Canada Cup promotions team was out in full force for Sam Steele Days over the weekend of June 18th – scoring a major hit with the thousands who lined the streets of Cranbrook for the kick-off parade. 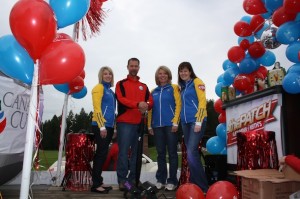 Cranbrook Mayor Scott Manjak joins Bronwen Webster, Shannon Kleibrink and Chelsey Bell aboard the Canada Cup float for the Sam Steele Days parade. (Photo: Brenna Baker)
The Canada Cup float featured two-time Canada Cup winner and Olympic bronze medallist Shannon Kleibrink, along with team members Bronwen Webster and Chelsey Bell.  The curlers were welcomed with standing ovations all along the parade route. In the afternoon fans had the chance to meet them in person during an autograph session at the Canada Cup booth in the Sam Steele Central Fair Grounds.  The event was a huge success in generating excitement and ticket sales for one of the most elite events on the Season of Champions schedule. The Canada Cup float will be on the road again for the Kimberley July Fest parade on July 16th. The promotions crew was also on site with the Canada Cup booth at the Cranbrook Children’s Fest – to the delight of the young kids who had the opportunity to play the Rocks and Rings game. 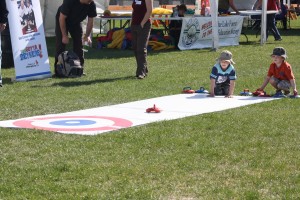 These curling stars of the future get their first taste of the roaring game at the Cranbrook Children’s Fest. (Photo: Brenna Baker)

Excellent seats are still available to see the best curlers in the country November 30 – December 4 in the Cranbrook Rec Plex.  Just click here to get yours now.